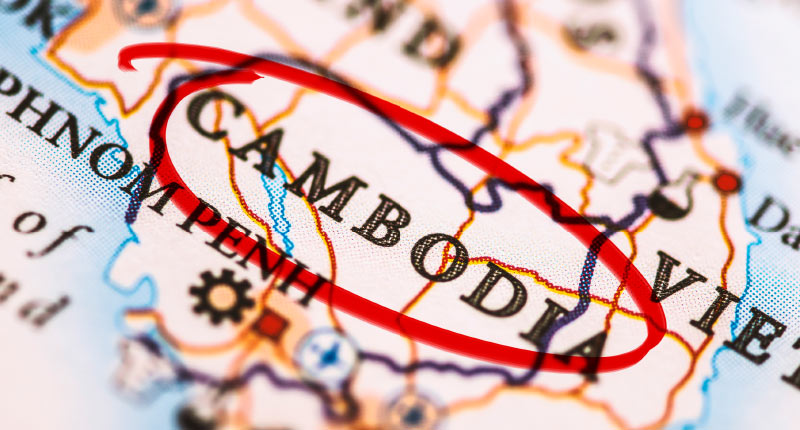 Cambodia, officially known as the “Kingdom of Cambodia,” is located in the southern portion of the Indochina peninsula in Southeast Asia. The country occupies a total area of 181,035 square kilometres and is bordered by Thailand to the northwest, Laos to the northeast, Vietnam to the east, and the Gulf of Thailand to the southwest. 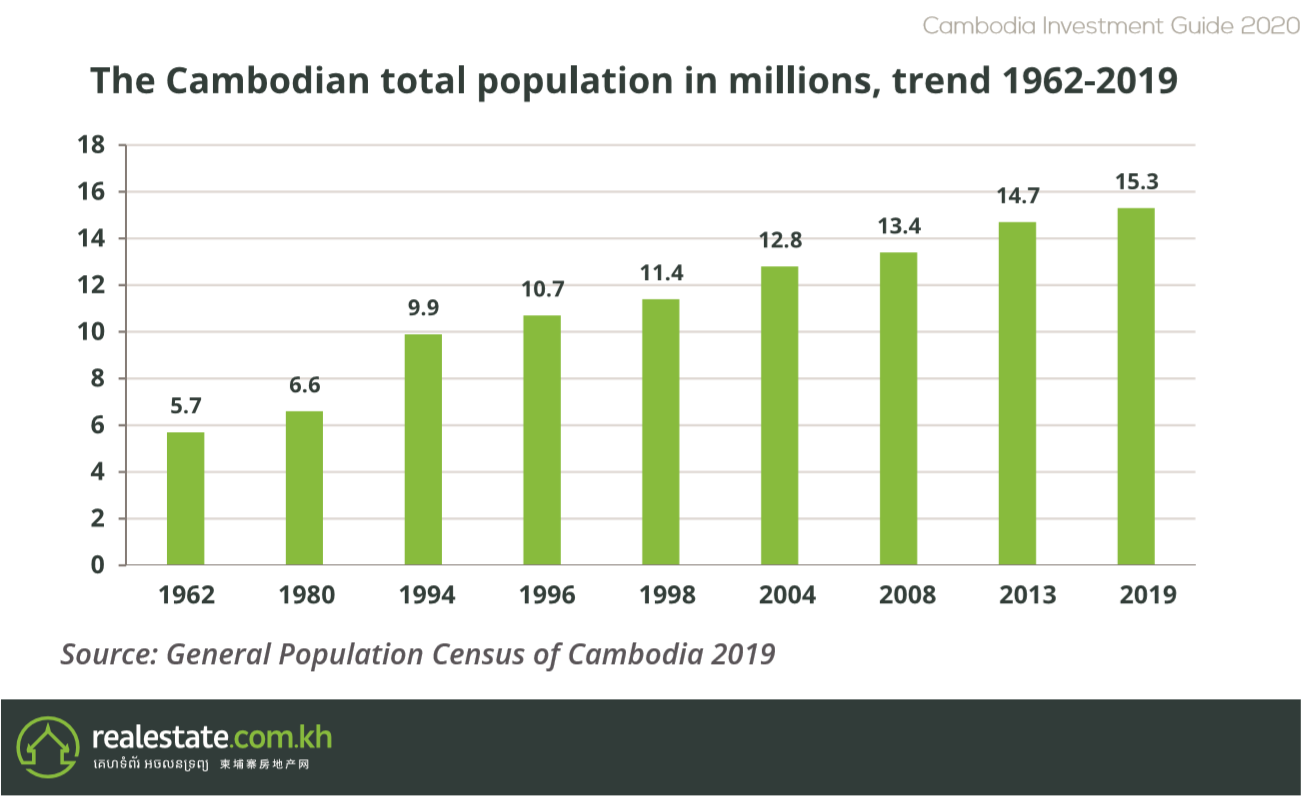 Cambodia’s population has been growing at a rate of 1.2% per annum since 2008 and surpassed 16 million in 2018. Of the 16 million total population count, 15.2 million is considered the de facto population living within Cambodia with 1.2 million Cambodians estimated to be living and working abroad, according to the 2019 General Population Census of Cambodia conducted by the National Institute of Statistics.

The largest of the ethnic group within the Kingdom is the Khmer, who comprise more than 90% of the population. Minority ethnic groups include the Chinese, Vietnamese and the Cham Muslims. Cambodia is also a popular destination for Western expatriates.

Most (41.09%) of the population is aged between 25-54, with Cambodia’s median age being 25.7, according to the CIA World Factbook. This disproportionately youthful demographic is a direct consequence of the population boom after the civil war period of the 1970s and 80s. The 2019 General Population Census of Cambodia indicates that the average number of people per household is 4.6 persons.

In recent years, the Cambodian government has given more attention to developing this younger workforce by improving access to education and fostering new skills, as the current labour force has the potential to offer 30 years of productivity.

The government, through the Ministry of Education, Youth and Sport, is working to improve the education system through its Education Strategic Plan 2019 - 2023 with help from international bodies like UNICEF and UNESCO along with other nongovernment organizations focused on education and children’s welfare.

This extended period of economic productivity, in combination with greater access to education and employment opportunities, will sustain Cambodia’s continuous GDP growth over the coming years.

While Khmer is the official language, English and Chinese are both widely spoken throughout the country. The level of English in major population centers make the market considerably easier to navigate than neighbouring nations such as Thailand, Vietnam and Laos. The adoption of Chinese in the country has also increased as a result of the influx of Chinese tourists and workers in the country.

Approximately 95% of the population is Buddhist, and Buddhism is constitutionally recognised as the official religion of Cambodia. However, the Buddhist institutions do not hold as much social and political power in modern times as in neighbouring Thailand or Laos.

The culture has a strong sense of work-life balance, which is reﬂected by the long list of public holidays. However, the pressures of commerce are beginning to alter this mindset in major urban centers, especially in areas where foreign businesses are established and concentrated.

There are approximately 150,000 expatriates currently living in Cambodia, with the majority living in the capital city of Phnom Penh. This figure includes Asian expats along with Western expats. This data is primarily anecdotal as there are no official ﬁgures.

Neither the Ministry of Foreign Affairs nor other government agencies have given any hard data. However, due to the increase of foreign investment and statistics surrounding occupancy of condominiums and new developments, it can be safely said that this figure is rising.

Cambodia has also been named the most valued retirement destinations in Southeast Asia by the Global Retirement Index in 2016. The index seeks to compare and contrast retirement destinations around the world for retirees, taking into account factors such as low rent and food costs, availability of healthcare and ﬁtness services and extendable visas.

In order to enter Cambodia as a foreigner, a visa is required. There are different tiers and requirements depending on the length of stay and plans while inside the country.

Tourist Visa, one month (E-Visa): An E-Visa is granted to foreigners upon arrival at the airport. This is valid for one month and the cost is US$35. A passport photo should be prepared before arrival, or an additional fee of $1 will apply.

Long Term Stay Visa (EB-Visa): In order to apply for an extension of stay (EOS), a foreigner must apply for an EB-Visa. The cost of an EB Visa depends on the length of stay. A six-month EB-Visa will cost $160, whereas one year will cost $290.

Working Visa/Foreigner Work Permit: An EOS for an EB-Visa will only be granted once, and in order for a foreigner to extend further they must obtain a work permit. Work permits are only available with evidence of employment in the country, such as a letter from an employer or a sponsor. After a work permit is obtained, it will allow the foreigner another EB-Visa but also incurs fees for the permit, application fees and health certificate (or a larger fee if a health certiﬁcate is waived).

Extending an EB-Visa without a work permit: However, without a work permit, a three-month, six-month or 12-month extension can still be granted if a foreigner can produce a formal letter from an employer guaranteeing that a work permit covering the following year will eventually be arranged. The letter needs to be signed and stamped, and should contain the following information: full name, date of employment, job title, passport number and address of the company.

The cost of living in Cambodia is still cheaper compared to the United States. For example, a 1-bedroom apartment in the United States sits on a national average of US$ 1,400 per month out of the 250 cities examined; the lowest being ~US$ 600 per month. On the other hand, a 1-bedroom apartment in Phnom Penh can cost an average of US$ 650; with the lowest being ~US$ 270 per month.

The cost of food, accommodation, healthcare and other amenities in Cambodia is extremely affordable compared to more industrialized countries. Meanwhile, the overall quality and diversity of these commodities is rising steadily.

The country’s official currency, the Khmer Riel (KHR), was introduced in 1980. However, the US dollar (USD) is the most commonly used currency of Cambodia as 80% of deposits and credits in the banking system are made using USD. Despite the predominance of USD, Cambodia is only considered partially dollarized as the USD circulates concurrently with the Khmer Riel as a legally acceptable tender.

Between 1991 and 1992, the United Nations Transitional Authority in Cambodia (UNTAC) was established as one of the United Nation’s largest and most expensive operations of all time, at a total cost of $1.7 billion. The operation sought to implement democratic governmental institutions and align the financial and political systems of an unsettled Cambodian system with international norms.

Dollarization continues to allow convenience to international investors wanting to move their money in and out of Cambodia, and allows a resilient currency for investments. This sets the country apart from other Asian counterparts such as Malaysia and Indonesia who prefer to trade solely in their local currency.

While there have been murmurings from the financial community in recent years about removing the dollar in favour of a riel-only economy, it seems unlikely that Cambodia will completely drop the dollar in the near future given the confidence the status quo offers investors and locals alike. 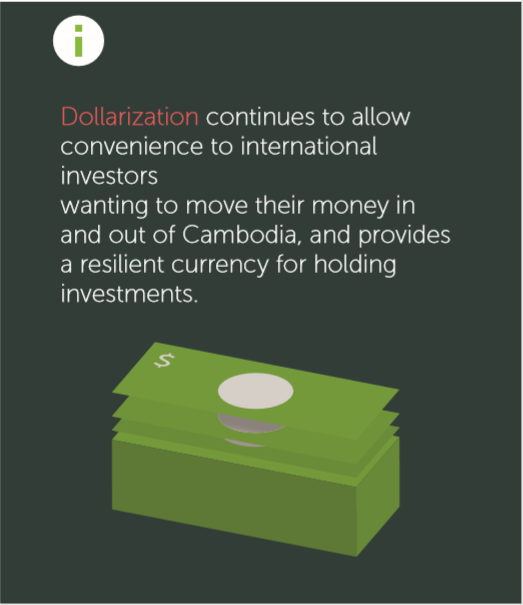 Cambodia is an economy that is driven by the use of cash, regardless of the size of the transaction. Credit cards and electronic payment options are also on the rise in order to allow convenience in consumer transactions.

Traditional methods of holding wealth, such as gold and land banking, remain popular among the older generation. However, the younger generation and emerging middle class generally trust banks as the preferred mode of storing wealth and are very quick to utilise online payment methods.

Unlike many countries around the world, Cambodia has no currency exchange controls or limitations put in place by the government. Moreover, there are no restrictions on remittances or the transfer of profits in and out of the country, so long as transfers are administered through registered ﬁnancial institutions.

Most transactions in Cambodia are conducted and denominated in USD, with remittances being subject only to the applicable withholding taxes. This continues to offer convenience to international investors because of the relative stability and strength of the USD.

Cambodia: A Final Frontier
The Opportunity in Sum

Cambodia: A Final Frontier
The Opportunity in Sum
1. About Cambodia: Core Industries 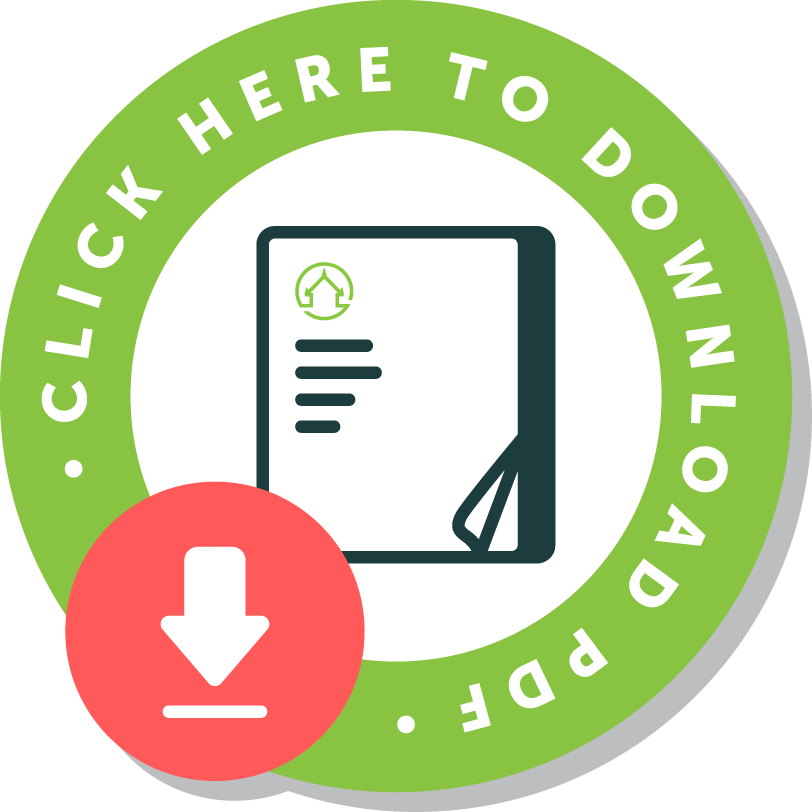