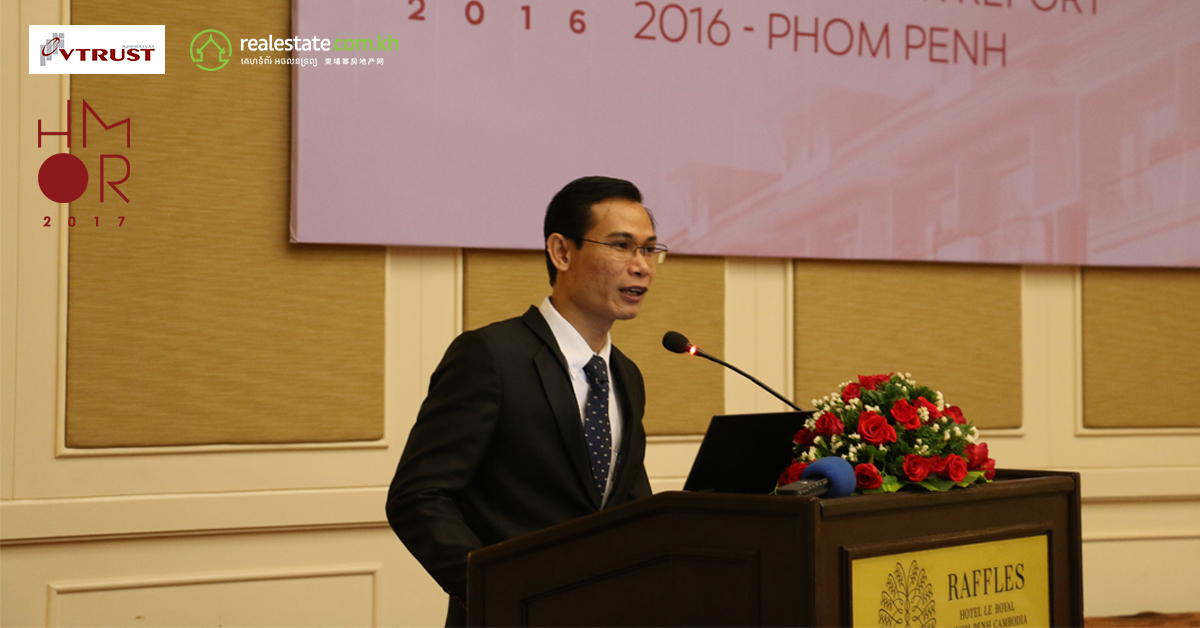 Far larger than last year when the focus was on Phnom Penh’s landed housing market, VTrust Appraisal this year has conducted comprehensive surveys across seven key cities of Cambodia on both landed housing and condominium markets. To learn how the markets will look like this year as compared to what it did last year, RealEstate.Com.Kh (ReakhNews) met with Mr. Hoem Seiha, director of research at VTrust Appraisal, to discuss over the subject.

ReakhNews: As we recall from what VTrust Appraisal presented last year about landed housing market, could you provide a brief of the results of your surveys this year?

Hoem Seiha: We’ve seen a drop in new launches for both landed housing and condominium projects, be it a few thousands of units for landed houses, as opposed to a very large number in 2015 and 2016, be it tens of thousands of units in just Phnom Penh alone. However, 2017 saw a very huge number of landed houses being completed and most of them are ready for occupants to move in. This resulted from many of the previous housing development projects that were launched between 2015 and 2016.

ReakhNews: You’ve also mentioned about condominium market in the surveys this year. So could you also provide a brief snapshot on this market?

Hoem Seiha: When we talk about condominium market, we refer it to that of Phnom Penh, as the market is not available in other provincial cities, except Sihanouville. Entry of new project launches was seen remarkably in 2015 and 2016, whose figures as combined represent almost half of the total supplies that accumulated for eight years. There was a strong market performance in term of primary market sales during the last few years, but now the situation has cooled down because buyers meet difficulty reselling their bought units.

ReakhNews: We’ve heard this year VTrust Appraisal has also included some key cities of Cambodia in the annual housing market surveys. How has it been now? Could you brief about the results of those cities? Which cities have the most potential for housing markets?

Hoem Seiha: We’ve done for sure. For the results, we’ve gone through some figures – all the studied provincial cities as combined will never match with those of the capital city in term of the number of new cluster housing units. Yet there’s surprising news – Poipet city, a cross-border city of Banteay Meanchey province, located along Cambodia-Thai borders in the north-west part of the country, outnumbered other cities in term of new cluster housing units as of 2017. This city has been known as “dry port”, as busy as the well-known seaport in Sinhanouville, and the city itself serves as a bustling hub for not only import-export but also trading and entertainment activities. For provinces with potential, we’ve seen many of them, but Sinhanoukville seems to stand out the rest at the recent moment.

ReakhNews: You have mentioned Poipet city has more new cluster housing units than the other studied provincial cities. Can you give more reasons? Further, in what way does Sihanoukville stand out? Can you just give some examples?

Hoem Seiha: Again, Poipet is a cross-border city where a huge volume of trading and entertainment activities exist. A large number of traders have been moving in there from different places across the country and settling down there for that economic reason. The housing supply has to increase to keep with that pace. For Sihanouville, as you might have seen, condominium market has recently boomed thanks to a huge volume of investments from foreign countries, mainly China within a recent moment. Some of the completed borey or cluster landed housing projects that were once dormant almost a decade has now been reborn by almost full occupancy. A few of cluster landed housing projects have been broken ground around the city, while some of the condominiums have been erected high enough to overlook the sea views.

ReakhNews: It’s all interesting news, and there seems a lot more to learn about the results of your surveys. We don’t have enough space here to provide all the details, though. For our audience who might want to learn more about the markets, what comments do you wish to leave for them here?

Hoem Seiha: Again, we have conducted housing market surveys in Phnom Penh and some key cities across the country. We have summed up our reports on market findings and will present them to our audience at our annual seminar “Housing Market and Outlook Report 2017 – Cambodia (HMOR 2017 - Cambodia”, which is going to be held on 15 December this year at Raffles Hotel Le Royal. At the seminar, we will present the most comprehensive market survey results as of 2017 on housing and condominium markets within key cities of Cambodia, including Phnom Penh, Sihanoukville, Siem Reap, Battambang, Poi Pet, Takhmao, and Kampong Cham.

Register for the seminar: