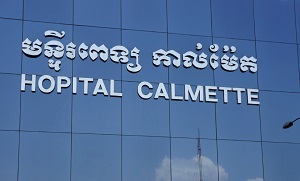 Cambodian government released $30 million from the state fund to help modernise facilities and to supply new medical equipment for Calmette Hospital, according to an announcement made by Prime Minister Hun Sen on Sunday evening.

The Prime Minister announced the plan publicly via a post to his official Facebook page after he spent three days with his mother-in-law who was staying at the hospital and learned that the hospital needed help.

“It has been three days that I stayed with my mother-in-law at Calmette Hospital. I noticed that the hospital has played an important role in checking up and treating people, but the hospital and the Ministry of Health face financial difficulties for the construction of a new building and to buy new medical equipment for the new and existing buildings,” the post reads.

“Today, I decided to release $30 million from the state fund to continue the construction of the 12-storey building which cost $39 million and seven thousand U.S. dollar that the hospital has finished about 17 percent,” the post continues.

Apart from the state fund, Prime Minister Hun Sen had started fundraising to purchase more medical equipment for the new and existing buildings. As of 24 November on Sunday at around 4:00 pm, he managed to raise $53 million. He hopes that there will be more donors to join the cause, the post added.

Calmette Hospital is one of the main hospitals in Phnom Penh city. According to the Hospital’s website, it was built in 1958 as a French Polyclinic, but unfortunately, the hospital was destroyed during the Khmer Rouge regime.

The hospital reopened its doors and continued operations again in the 1980s with a few healthcare providers who survived the regime.

Calmette Hospital is one of many quality healthcare facilities in Phnom Penh. Read our complete guide to Phnom Penh hospitals, clinics and dentists here.