Gross domestic product (GDP) growth remains strong in Cambodia, ﬁercely driven by the growing real estate, construction, garment manufacturing and tourism sectors. The Asian Development Bank has even labelled Cambodia as the new “tiger economy” due to the nation’s consistent economic growth. The Economist Intelligence Unit, a UK-based company renowned for their analyses and economic forecasts of over 200 countries, recognised Cambodia as one of the fastest growing economies and forecasted that the Kingdom’s GDP growth will remain strong over the next ﬁve years and will reach well over the 6% mark per year.

At the end of 2016, GDP growth in Cambodia reached 6.9% and that growth was expected to remain consistent. That number slightly increased to a 7% GDP growth in 2017, and experts expected the growth to stabilize at 7% for 2018. But Cambodia’s economic activity surged resulting in a better than expected 7.5% growth for 2018. The World Bank, the Asian Development Bank, and the ASEAN, expect the growth to ease at 7% at the end of 2019.

The Kingdom’s GDP amounted to $24.5 billion in 2018, a $2.3 billion increase from 2017, according to the National Bank of Cambodia’s July 2019 report. If the same kind of growth is sustained towards the end of 2019, we could expect a $26 billion GDP this year due to increasing economic activity and confidence within the Kingdom.

It’s worth noting that the Cambodian economy performed well in 2018 despite the commotion usually tied with election years and the on-going trade war between the United States and China.

GDP per capita in Cambodia was $1,559 in 2018, a rise of 9% from $1,429 in 2017. GDP per capita figures for 2019 has not yet been released but projections from KPMG Cambodia expect it to go over $1,610. According to the World Bank, due to two decades of strong economic growth and a rising per capita GDP, Cambodia has graduated from “low income” status to a “lower-middle income” country, putting the Kingdom in the same category as Vietnam and India. The country received this designation in 2015.

Regardless of this reclassification by the World Bank (which relies on a fundamentally different ranking system), Cambodia is still considered a “least developed country” by the United Nations. Though this classification can be a benefit to the Kingdom as it allows it to receive benefits such as preferential trade agreements and international aid.

In terms of global GDP ranking, the country is still comparatively low, especially in terms of income per capita. However, the rate of current and prospective GDP growth makes the Kingdom a prime choice for foreign investors seeking to enter a low-cost but fast moving economy with few signs of slowing in the coming decade. 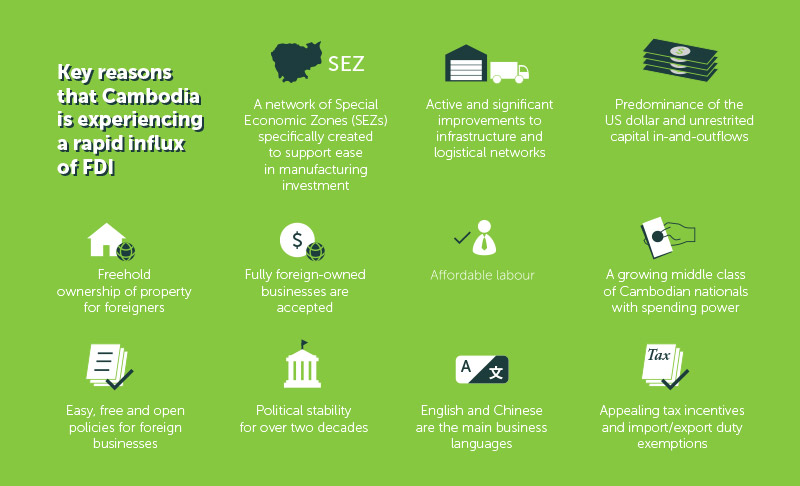 Cambodia continues to see an increase in foreign direct investments (FDI) every year, a key driving force of the Kingdom’s economic development. Over the past decade, FDI in Cambodia has increased by over 800%, which demonstrates how long the Kingdom’s economic potential was left unnoticed on an international level. China, Japan, Vietnam, Thailand and South Korea are the main sources of FDI inflows in recent years, and the property sector is one of the biggest benefactors of this annual growth.

Cambodia has received over $6 billion in FDI from January to August of 2019 - an increase of 50% during the same period in 2018. According to the Cambodia Development Council (CDC), this is the aggregate FDI value of 222 approved projects in that time period. This means that this number will likely increase by the end of 2019.

The consistency of FDI inflows have resulted in the stabilisation of inflation, consistent growth of key economic indicators such as GDP, and have aided in the reduction of poverty, economic diversification, and improvements to the manufacturing sector.

Cambodia’s economic performance and potential has already been recognised to the extent that many existing investments have shifted away from China, Thailand, and Vietnam in favour of Cambodia, to take advantage of the country’s more favourable investment environment. Despite all of these strengths, there are some remaining challenges for foreign investors.

Although labour is extremely affordable, workers are often unskilled due to low education levels. There are talented individuals to be found within the Cambodian labour market, but ﬁnding qualified candidates for higher management and more technically specific roles can be challenging.

These difficulties are not lost on the Royal Cambodian government. Together with foreign investors, the government will be upgrading these critical systems, particularly in key economic regions such as Phnom Penh, Sihanoukville and Siem Reap, to overcome the barriers that prevent both local and international investments from sustaining Cambodia’s robust rates of growth.

Chinese foreign investment is of particular importance to Cambodia’s economy. From 2017 to 2018, 19 major MoUs were signed between the two nations relating to a variety of initiatives, with an overriding focus on infrastructure improvements as well as health and agriculture.

According to Chea Vuthy, deputy secretary general of the Council for the Development of Cambodia, China has contributed 35% ($7.9 billion) of total FDI ($22 billion) in the country from 2016 to August 2019. Chinese investors have ventured into various fields including transport infrastructure development, hydropower plants, telecoms, industrial zones, garment and footwear factories, banking and ﬁnance, real estate and construction, agriculture, and tourism.

Cambodia’s appeal to local and foreign investment is enhanced by a business-friendly environment and a government that offers investor-friendly laws and regulations:

1) The Cambodian government treats all investors equally, regardless of race or nationality (with the exception of land ownership and some specific investment activities).

2) The government does not impose price or foreign exchange controls.

3) There are no imposed trade restrictions.

4) The Cambodian government allows foreigners to lease land for up to 50 years, and even longer in some situations.

6) Profts and other earnings can be freely repatriated without restrictions from the government.

To qualify for QIP, an investment project should get a Final Registration Certificate (FRC) and an investor should register the investment project with the Council for the Development of Cambodia (CDC) or the Provincial Municipal Investment SubCommittee (PMIS).

QIPs are entitled to the following special incentives:

1) QIPs have the choice to select either a proft tax exemption or a 40 percent special depreciation allowance on the value of tangible properties (anything that can be touched), either new or used, that are utilised for processing or production. An annual Certifcate of Obligation Satisfaction, also known as Certifcate of Compliance, needs to be obtained by QIPs in order to be exempt from paying proft taxes. A proft tax exemption is applicable for a maximum of six years. After that, the QIP is subject to proft taxes.

3) Additionally, they receive a full exemption from export taxes, except for activities as stipulated in other legislation.

4) A QIP in an Special Promotion Zone or Export Processing Zone gets the same privileges as other QIPs.

These incentives allow competitiveness within the export market and are benefcial in terms of international trade.

Special economic zones (SEZ) are geographic areas within Cambodian territory, allocated and set up by the government, businesses and trade regulations that differ than the rest of the country. SEZs also offer key infrastructure for businesses seeking efficiency, such as backup power sources, sewerage and water, roads and onsite customs, tax and other government representatives. Generally, SEZs are best suited to large scale manufacturing operations, for example garment and footwear factories, automotive production facilities and food processing plants.

A large network of SEZs throughout the Kingdom has encouraged and incentivised foreign investment into the industrial sector for many years. SEZs provide additional tax breaks, infrastructural backbones and integrated customs support for manufacturing investors.

The government has recognised the financial and time advantages gained by channelling critical infrastructure and labour resources through one speciﬁc location. This is why 33 SEZs have been approved around the country, complementing a vast network already in operation. The strategic placement of these zones allows for easy access to necessary borders and manufacturing hubs.

Phnom Penh’s SEZ is a prime example, with its location on the perimeter of the capital. From a foreign investment perspective, SEZs save funds that would have been spent on land development, infrastructure, security and ongoing maintenance. Tax exemptions on production materials and equipment are possible when an SEZ tenant has a QIP license and profit tax exemptions are available. SEZs make it possible for foreign investors to acquire renewable leases of up to 50 years, and in many circumstances tenants are able to develop, subdivide or sublease the property.

The Sihanoukville SEZ (SSEZ) remains Cambodia’s largest, with an area of over 1,000 hectares. The $320 million development, once fully completed, will be capable of hosting 300 factories, 80 to 100 thousand workers and will cover 11 square kilometres.

Approximately half of this space is designated for textile, clothing and electronic manufacturing, as well as light industry products. China has pledged to continue to develop the SSEZ and so far it has attracted more than 100 companies from the Kingdom, China and other nations and has resulted in almost 20,000 new employment opportunities.

Approximately half of this space is designated for textile, clothing and electronic manufacturing, as well as light industry products. China has pledged to continue to develop the SSEZ and so far it has attracted more than 100 companies from the Kingdom, China and other nations and has resulted in almost 20,000 new employment opportunities. The success of the SEZs around Cambodia has already resulted in new opportunities for Cambodians and the country as a whole. Over 68,000 jobs have been created thanks to the incentives of SEZs in the country. This success is largely due to the fact that the government has left the management of SEZs in the hands of private sector developers, which has enabled Cambodia’s public sector to avoid bearing the brunt of costs and led to the establishment of a sustainable market.

One of the primary reasons that so many foreign entities choose to establish their businesses in Cambodia is the lack of legal constraints on foreign-owned entities. Other than outright ownership of land, business activity for foreigners is the same as that of a locally-owned company.

Cambodia placed 20th out of 190 countries in the “Access to Credit” category of the World Bank’s “2018 Ease of Doing Business”. This was mainly due to closer cooperation between fnancial institutions and the Credit Bureau of Cambodia, which facilitated easier access to financing. 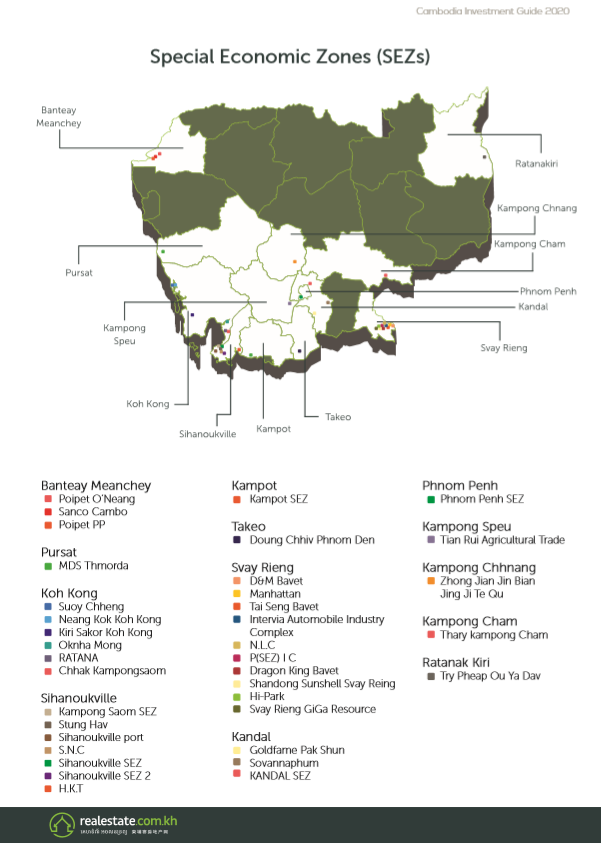 Starting a Business in Cambodia:

On average, it takes 113 days and costs $614 for investors to complete the procedures to legally operate a business in Cambodia. Starting a business in the Kingdom involves nine key steps.

The steps, the cost and the number of days it takes to ﬁnish each step, are enumerated below:

1) Finding a suitable name for the company and have it approved by the Ministry of Commerce’s Business Registration Department: seven days/$10

2) Registering the company with the Business Registration Department: 30 days/$420

4) Opening a bank account in the company’s name, depositing required starting capital and obtaining a bank statement attesting to the deposit: one day/free of charge

5) Stamping and approval of the Memorandum and Articles of Association and other registration documents, and registering for Value-Added Tax (VAT), Patent Tax, and Tax Identifcation Number (TIN): 30 days/$100

6) Informing the Ministry of Labour about the start of operations and hiring of employees: 30 days/$69;

7) Submitting original company statutes and evidence of capital deposit at the Business Registration Department: one day/free of charge

8) Receiving inspection from a Ministry of Labour ofcial: one day/included in fee for step 6

9) Registering at the National Social Security Fund: 14 days (done together with the previous step)/free of charge.