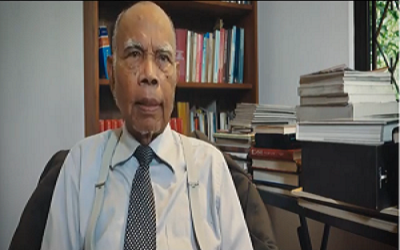 Vann Molyvann, considered the founder of the modern Khmer architecture, passed away on 28 September, 2017, at the age of 91, in his own home alongside Siem Reap river, in Siem Reap province.

Molyvann was a very famous Khmer architectect from the 1950s until the 1970s whose work was considered at the forefront of the very unique style of architecture that emerged during this time. He completed nearly 100 projects both nationally and abroad including projects in Japan, France and many other key countries. The impact of his architecture is still felt around numerous corners of the Kingdom - with many still applauding his impact and contributions to what Cambodian architecture is today.

Some of Molyvann’s most significant projects are; the Independence Monument, the National Olympic Stadium, Chroy Changva Bridge, the Royal University of Phnom Penh, the Chaktomuk Conference Hall, Preah Suramarit National Theater, and the State Palace in Chamkarmon – now the place of the Senate. All of these projects are now considered critical landmarks amongst Khmer locals and the many expats and which reside in Cambodia.

Read more about Preserving Heritage in Times of Development 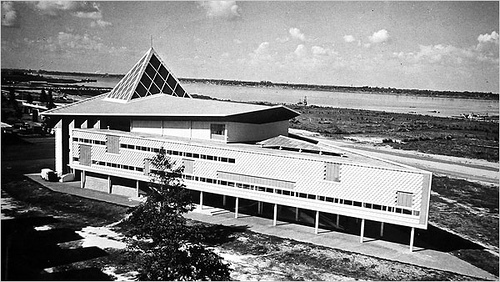 There are also several of his projects which are less known by the general public; such as the stupas within the Royal Palace, the Kantha Bopha Hospital, Sihanoukville Master Plan, the first Siem Reap airport and the pavilions and temples for the 2,500th anniversary of the Buddha. Although these projects are less known, they are still true to Molyvann’s truly unique style and standard of perfection he strived for in all of his projects.

Mr Mollyvan had often talked about his projects with pride - even the ones that are not still in existence. He stated “I have built many architectural projects, - although not all are still in existence: The ones I love the most are the National Olympic Stadium and Preah Suramarit National Theater on Bassac in Phnom Penh. There are many other projects I was very fond of, but unfortunately some of them have been replaced​ by new buildings, or were destroyed.”

His passing has become a shock for the Khmer people, for many are familiar and admire his  great architectural work. Architectural students have found this loss particularly challenging as they truly understand the level of skill and patience necessary to complete the projects that he did- all drawn by hand without the aid of modern technology.  Mr. Kea Sovanna, a Khmer, fourth year student in architecture, said, “I am so sad to hear the news of his passing [Vann Molyvann]. He did the best and most unforgettable architectural projects.” Mr Kea added that he will continue to integrate elements of Mollyvan’s work into his own style of architecture as he pursues his studies and his career in this field.

There are also a great deal of  people have been working on collecting all this work to show the next generation. Mr Srin Sokmean, the photo expert and owner of  “Amazing Cambodia”, is working on addressing the recurrent issue of demolition of old architecture in Cambodia. “It is a great pain to witness those architectural heritages disappear one by one. I always question myself why they are destroyed and not suitably renovated.” said Mr Sokmean.

As a result of his passion in this area, he has produced a vintage photo collection book named “Cambodia: Half Century Then & Now” which aims to enable people to visualize the beauty of Cambodia in the past and how the current landscape has been modified. This publication heavily features Mollyvann’s work.

To further the preservation of Molyvann’s work, Mrs Teav Bandol from Image Printing is planning to re-publish multiple books detailing Vann Molyvann’s works in order to ensure his contributions reach the next generation.

Bandol mentioned that the publication of these books is not just for the purpose of preserving Van Molyvann’s buildings – but it’s also “a demonstration of intelligence, knowledge and innovation in the architecture industry - which is a good example for the new generation to follow.” He is hopeful that Cambodia will take the time to discover talents and develop the  resources to build another inspiring era of architectural masterminds and landmarks.

So while Molyvann passes today, Cambodia will remember his legacy - and his work will be preserved in a new generation of architects and enthusiasts.