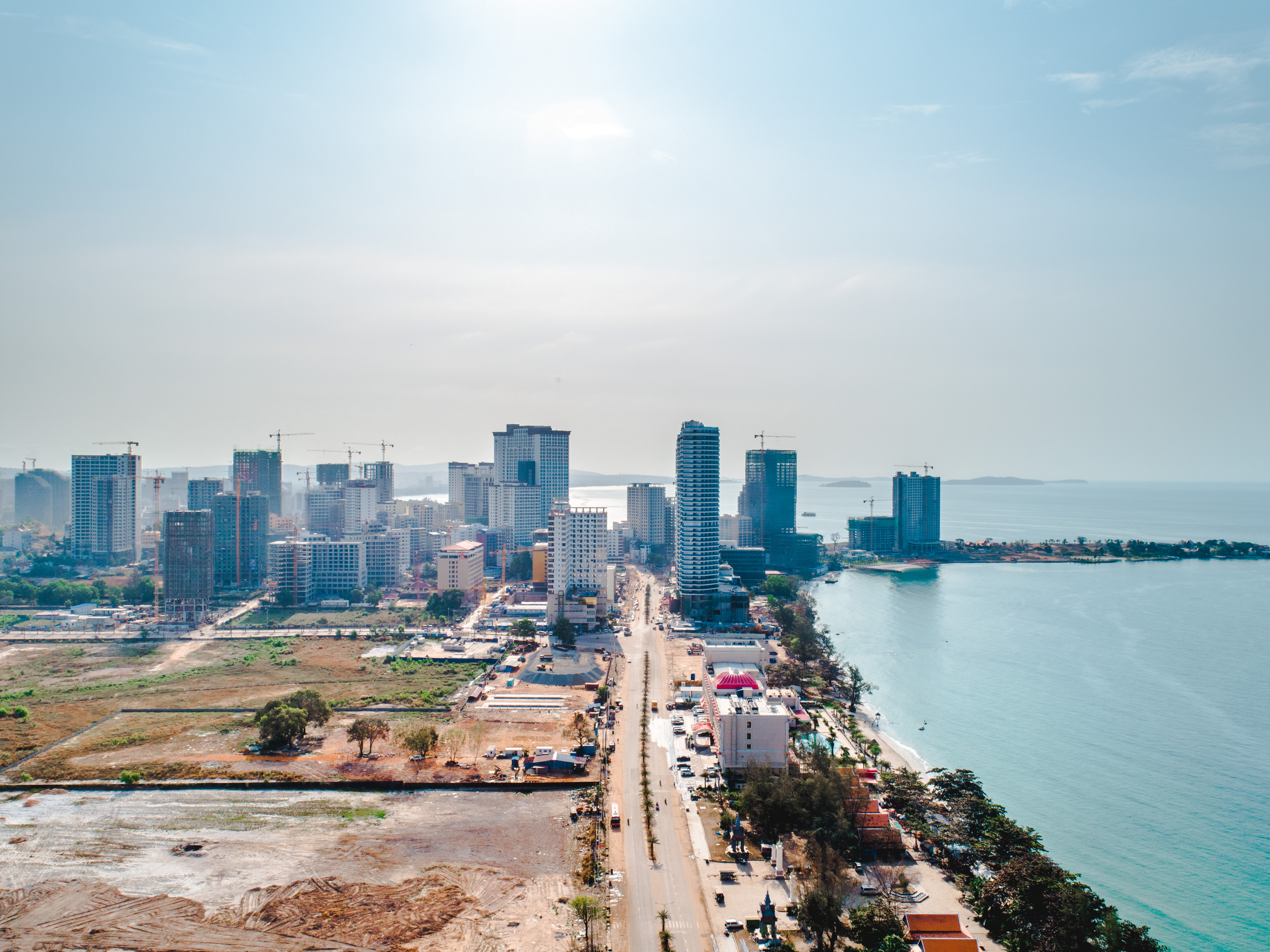 Sihanoukville, known as Kampong Som in Khmer, sits on the Kingdoms’ peninsula of the pristine southern coast on the Gulf of Thailand. As the fourth-largest city in Cambodia, it is a key hub for trade, business and tourism and it has been undergoing massive development. The coastal city also is the capital of Preah Sihanouk province.

Since around 2017, Sihanoukville has seen rapid development, mainly due to skyrocketing tourism and foreign investment from China. The city is seen as a vital cog in China’s One Belt, One Road initiative.

Continued demand for land has pushed up the prices, to a point where it was higher than sought after beachfront land prices in Thailand and Vietnam. Meanwhile, the tourism markets in Thailand and Vietnam are more developed than Cambodia although it is constantly being improved upon. Increase in tourism, trade and infrastructure improvements are driving an increase in rent of accommodation and commercial premises in Sihanoukville. This has caused some residents and business owners to relocate outside of the city centre while the huge development plan is in progress upgrading roads, drainage, access to amenities and at the international airport and seaport.

The city is earmarked as a city of the future and a potential jewel in the crown of Cambodia and SEA. With its coastal and serene landscape and easy access to the tropical island paradise, Sihanoukville’s strategic development is of vital importance to Cambodia.

Sihanoukville has a long history of trade, and after independence, plans were made to construct an entirely new deep-water port in Sihanoukville.

The location was chosen as a port city for its depth of water, protection from the elements and accessibility. The provincial capital, Sihanoukville was chosen to honour King Norodom Sihanouk, who fought for the independence of Cambodia from the French and for the Khmer people after the time of the Khmer Rouge.

Over recent years, the province has experienced rapid growth and investment. The growth exploded with real estate development and tourism as well as plans to develop multiple casinos.

Due to the rapid inflow of foreign direct investment (especially Chinese investment), Sihanoukville has become an important part of Cambodia's economic growth and future plans. Foreigners currently investing in the Cambodian property sector in 2020 come from 18 countries, the majority being Chinese, South Koreans and Japanese.

Sihanoukville is viewed as the next big investment hotspot in Cambodia and offers prime land for development. Sihanoukville is “a landmark project” on China’s Belt and Road Initiative and its current economic renaissance is mainly due to its strategic location and presence of important businesses and industries. These industries include transportation and logistics, tourism, fishing, processing and manufacturing, textiles and real estate.

Incentives promote Chinese businesses to invest in “special economic zones” in Cambodia where they can enjoy benefits such as lower taxes and faster permits. The Sihanoukville Special Economic Zone (SSEZ), is located 3 kilometres from the international airport and 12 kilometres from the port. The SSEZ's proximity to international transportation hubs makes it an attractive area for companies looking for easy access to South East Asia's busy trading routes.

Sihanoukville has the only deepwater port in the Kingdom of Cambodia and it is an economic corridor for many popular industries and also serves as a major trade hub, connecting Cambodia-based manufacturers to the world. The upgraded multi-functional Sihanoukville Autonomous Port, at a total cost of about 74 million US dollars, was officially launched in June 2018 allowing larger ships to enter the port and is an important gateway to exporting and importing products.

With the support of the government, the area of Sihanoukville continues to expand and the investment from China and ASEAN has greatly promoted the development and growth of the real estate industry.

It is also important to note that the Cambodian government announced in August 2019 that it will no longer be renewing online casino licenses in Cambodia. The announcement had an immediate impact with as many as 400,000 Chinese workers believed to have left the province by December 2019, according to the General Department of Immigration. About two dozen land-based casinos are still thought to be operating in the city including Queenco hotel & casino, a popular upmarket destination.

The population of Cambodia is around 16 million people while the total population of Sihanoukville is thought to exceed 300,000. The resident foreign population exceeds 200,000, of which 80-150,000 are thought to be Chinese (although the exact data is unclear as the population fluctuates).

Things To Do in Sihanoukville

Compared to the capital of Phnom Penh, Sihanoukville shopping options are more limited. Though there are no international-grade shopping centres similar to something like AEON Mall, large malls are under construction.

The city is rapidly transforming into a modern sprawling metropolis under current development plans. Some of the best shopping options are Samudera Market, Orange Market and Lucky Ocean Supermarkets.

Furi Times Square is one of the new retail additions to Sihanoukville, located close to the pier gateway to the islands. The mall offers some of the most popular F&B franchises and other brands in Cambodia such as The Pizza Company, Starbucks and KFC. There are plenty of family and kid-friendly activities such as the cinema, a playground, a bowling alley and a rollerdrome at the mall.

Sihanoukville is famous for having some of the best beaches in Cambodia with immaculate white sand and crystal clear water. It is also the gateway to the popular tropical islands.

The Golden Lion in Sihanoukville is a well-known landmark in the city while Wat Leu is also a popular attraction located in a forested area 1.5 kilometres from the centre of the city.

A number of iconic hotels, apartment buildings and other developments are in the process of being built in Sihanoukville which will form an iconic part of the skyline.

Sihanoukville has excellent dining options with abundant Khmer and international food. Seafood is more popular due to its location on the coast but there is a wide selection of affordable dining and more refined options available.

There are also local seafood vendors near the beaches, offering excellent value for money on popular evening BBQs, and fresh seafood.

Sihanoukville is a small but growing city with an evolving nightlife. There are some beach bars and beach leisure venues, including live music venues and karaoke bars available. Hotels also offer events and functions around glitzy pool settings.

Prince Times Hotel is also popular for its luxury accommodation and dining, as is highly-regarded Sokha Hotel which has branches nationwide.

The beaches that are popular include Ochheuteal, Otres and Serendipity Beaches.

Transportation options in Sihanoukville are diverse and the city is accessible by plane, train, bus or even boat.

Roads: There are taxi and tuk-tuk options within the city and ride-hailing apps are common. Tour buses and car rental companies also have service points within the city.

Flights: There are numerous international airlines operating at the Sihanoukville International Airport, and at the start of 2020 it was linked to 15 destinations in China alone. The airport has undergone stages of major renovations which will eventually allow for the handling capacity for 5 to 10 million passengers from 2030-2040. The completion of the new runway is due for completion in 2020 to allow for larger aircraft.Highways: National Highway 4 directly connects Sihanoukville to Phnom Penh while the new four-lane expressway project that started in 2020, and is due to be completed in 2023 at a cost of $2 billion, will stretch 190 kilometres with a width of 24.5 metres.

Sihanoukville is believed to have a population of over 200,000 resident foreigners, most of whom are Chinese.

There are 10 floors Apartment for Rent

Price Trends for Properties for Sale in Sihanoukville

Price Trends for Properties for Rent in Sihanoukville