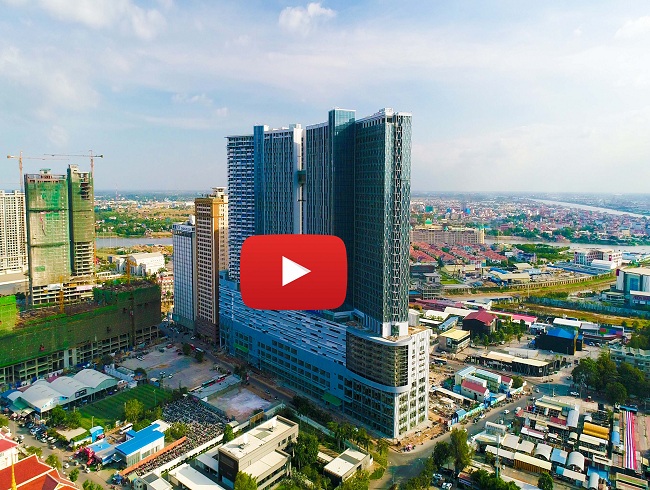 Oknha Sear Rithy, one of the most respected and prominent Cambodian businessmen, said Cambodia is on the right track amidst the challenges of modern times.

In an exclusive interview, Oknha Sear Rithy noted that Cambodia has a come along-way from an impoverished country beset by constant strife and rampant poverty to one of the fastest-growing economies in Asia.  Peace only returned to this former French colony after the signing of the Paris Peace Agreements in 1991 which ended decades of Civil War.

In the last 15 years, Cambodia’s economy has grown by an average of 7 percent.  In 2016, Cambodia also achieved Lower-Middle Income status after being classed as Low Income for many years.

Oknha Sear Rithy said growth from 2000 to 2018 was mainly concentrated in these four areas: industry, tourism, property, and agriculture.

In the decade, according to him, the property sector emerged as the top driver of the Cambodian economy. “In the last ten years we can say that property has taken over as the top element,” he said.

Cambodia’s consistent economic growth has led to a growing middle class. “The middle class of Cambodia now is mostly young teenagers,” he pointed out.

Oknha Sear Rithy also noted Phnom Penh’s phenomenal growth. From a “ghost city” during the time of the Khmer Rouge, Phnom Penh is back to its former status as “Paris of the East”.

Peace and massive investments are often cited as the main reasons for Phnom Penh’s turnaround.

“There are more investment from China, Japan, and some other countries,” he noted.

Phnom Penh’s growth is evident in the construction frenzy going on around every part of the city. Business is also booming in many parts of the city, with new restaurants, hotels, shopping marts, and other businesses popping up almost every week.

Construction of seven new shopping malls is ongoing, with several more in the pipeline for next year.

Oknha Sear Rithy’s rise to become one of Cambodia’s most successful businessmen is an interesting story by itself.  Cambodia was transitioning to democracy when Oknha Sear Rithy was appointed as Freight Auditor for United Nations Transitional Authority in Cambodia in the early 1990s.

Oknha Sear Rithy started his own company a few years later, distinguishing himself as a trailblazing entrepreneur of the new Cambodia. It was just the beginning of a long and very successful career in real estate.

Oknha Sear Rithy soon became one of Cambodia’s most renowned property developers. He built a name for himself by building iconic developments such as The Peak, The Bridge, and The Palms. He has also been responsible for the launch of the nation’s first affordable housing project.