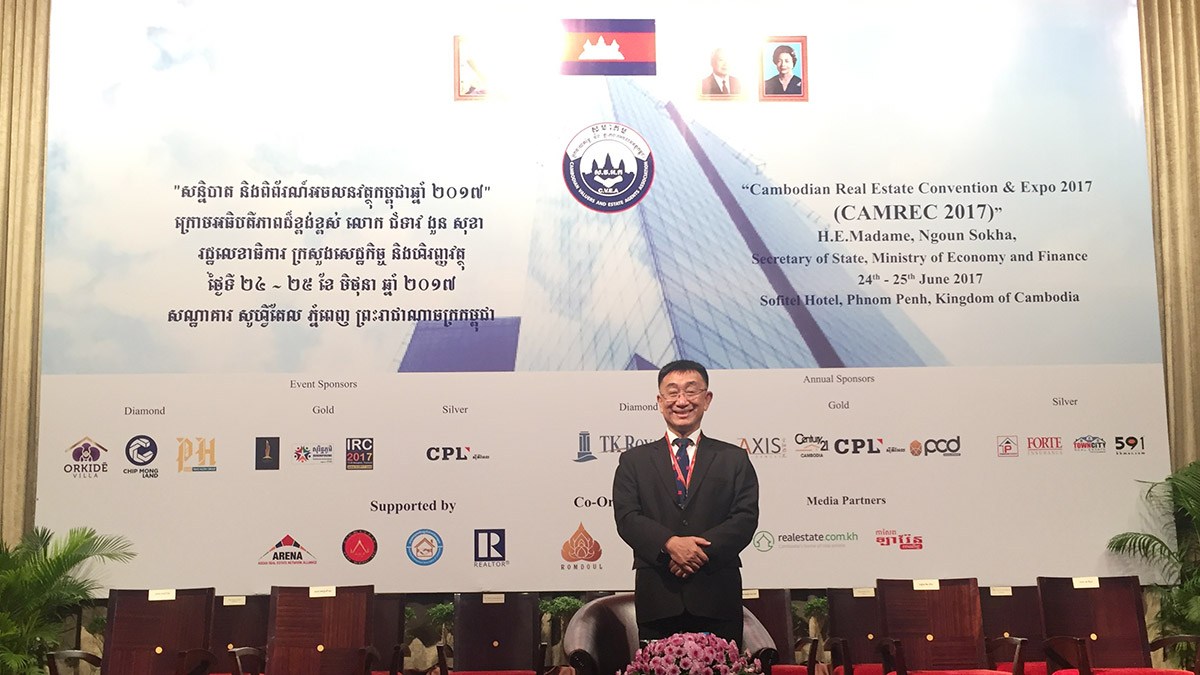 What do Cambodian real estate beneficiaries perceive about property markets in Cambodia? Dr.Sopon conducted a survey and would give an answer.

On June 24, 2017, Dr.Sopon Pornchokchai, President of FIABCI Thailand, Thai Appraisal Foundation and Agency for Real Estate Affairs went to give a speech on "the 20 Years of Housing Markets in Bangkok in Comparison to Phnom Penh" at the Cambodian Real Estate Convention and Expo 2017 for the members of the Cambodian Valuers and Estate Agents Association (CVEA) at the Phnom Penh Sofitel in Phnom Penh. During his presentation, he conducted a survey of real estate beneficiaries on property perception in Cambodia.

There were some 300 participants. However, around 150 of them responded to the questionnaire distributed to them on that day. Those respondents were broker's 39%, developers and contractors 30%, consultants (valuers, architects and engineers) 14% and investors 17% This implied that this convention had a diversity of participants who could generally represent the property beneficiaries in Cambodia.

On the whole, the majority (56%) said that property markets in Cambodia would be better in 2018. Those who believe that the markets in 2016, 2017 and 2018 were unchanged, constituted some 22%  and only 22% said the market could be worsening in 2018 or next year. In sum, the beneficiaries believed that the markets are still growing significantly. Investors could consider Cambodia as a good place for investment.

Residential development particularly owner-occupied residence including detached houses, semi-detached, townhouses, shophouses and condominiums are voted the most attractive sector for investment at some 33%. Buying land (serviced or raw land plots) were the second in the priority at 27% Dr.Sopon visited some land subdivision projects and found that some could make some 200% profit!

In addition, rental apartments were listed as No.3. The fact was that there are a lot of migrants who moved from upcountry to work in the city particularly Phnom Penh. Therefore, the needs for rental housing were high. Other sectors mentioned were shopping centres, office space and industrial properties. However, these sector were more risky and need a lot of construction.

Singapore was among the most attractive country to buy for the respondents. This was because it was very neat and of high standard. However, a foreigner had to pay some 15% for the transfer fee in advance. Every year, they had to pay property tax equal to some 1% of the market value.  This would be big burdens which were not realized by many buyers at the beginning.

Thailand was the second in the priority. It was believed that quite a large number of wealthy people in Phnom Penh bought a house or condominium unit in Bangkok and many other major cities in Thailand. Bangkok was at some 1 hour flight from Phnom Penh only. People among the two countries were also very friendly. In addition, Australia and New Zealand were ranked No.3 in the priority. Malaysia was also quite attractive. However, ideally, USA and Europe were among some definite destinations for investors from Cambodia as well.

Cambodia economy and property markets were on the rise. There were still high hope for betterment in the future.  In a detailed analysis, those brokers had a more positive view than others. Developers were also quite positive. However, for other consultants and individual investors, they were more cautious. The proportion of these groups who believed that the situation next year would be a lot better than this year, was significantly lower for them.

An implication is that Cambodia would be a great destination for foreign investors. However, prior to the penetration into the markets, one should study the markets thoroughly. A good partner is also needed. According to Dr.Sopon's experience in surveying property markets in the ASEAN Region, Phnom Penh was ranked the third in the priority after Jakarta and Manila.

Dr.Pornchokchai has had experience in real estate research and valuation since 1982. He is the President of FIABCI Thailand Chapter, the Thai Appraisal Foundation and the Agency for Real Estate Affairs, IAAO representative to Thailand, the Director of Thai Real Estate Business School, and a member of the Global Valuation Forum of the Appraisal Foundation (USA). His research master pieces include the discovery of 1,020 slums (1985), CAMA (computer-assisted mass appraisal) modeling (1990), forecast of 300,000 unoccupied housing units (1995 and 1998), study for property information centre (2000), the roadmap for valuation profession for Ministry of Finance, Vietnam (2006), the consultancy service to Ministry of Finance, Indonesia (2008), World Bank Indonesia (2010), the consultancy service to Ministry of Finance, Cambodia (2012), UN World Cities (2015), ASEAN Property Surveys (2017), and Global Municipal (2017)