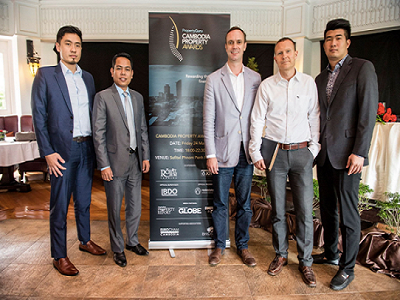 Eleven of the Kingdom’s leading real estate developers have made the shortlist for the second annual PropertyGuru Cambodia Property Awards 2017.

More than 30 projects located in prime investment destinations across Phnom Penh, Siem Reap and Sihanoukville joined this year’s competition, with the Winners and Highly Commended set to be revealed at the black-tie gala dinner on Friday, 24 March at the prestigious Sofitel Phnom Penh Phokeethra.

Shukaku, a residential and commercial developer based in Phnom Penh, leads the list of official nominees, with a total of five nominations across the Development and Design categories, including Best Housing Development (Phnom Penh) and Best Retail Development. Its corporate headquarters, called ‘The Vanguard,’ is nominated for Best Office Development and will go up against two-time nominee TACC (C.R.) Ltd, developer of the mixed-use project called ‘The Gateway.’

“I certainly gained a lot of new knowledge from the other judges, who possess different skills than myself, at every stage of this competition,” says Sorn, who was elected head judge earlier this year. “In the last six months we exchanged expert opinions and technical considerations, and discussed various strengths of each entry. I feel so proud to be a judge for the Cambodia Property Awards 2017.”

He adds: “The property boom in the past 10 years has seen a drastic change. In 2007 there were only two high-rise buildings in Phnom Penh – now we have hundreds across the city. Land prices have also grown exponentially for up to 75 percent in the last decade, and certain developments have been valued between USD3,500 and 4,500 per square metre. This growth has made the Cambodian real estate market very attractive for investors in the region and Asia.”

Top country winners in Cambodia will be moving forward to the two-day PropertyGuru Asia Property Awards grand finale this November in Singapore to compete for more regional accolades.

Hari V. Krishnan, CEO of PropertyGuru Group, comments: “We’re delighted to be back in Cambodia for a second year to promote the best projects and help property seekers in identifying the best developers to target for their dream homes and property investments.

“Cambodia real estate has grown tremendously in the last few years, and we look forward to bringing lessons from the more established regional markets to this country, to assist with the maturation process. PropertyGuru Group’s presence in Cambodia through the Asia Property Awards helps us progress our company mission of helping people make confident property decisions."

With much fanfare and media coverage, the inaugural Cambodia Property Awards in February 2016 was attended by more than 300 high-profile guests and VIPs, including His Excellency Dr Pen Sophal, representative of His Excellency Senior Minister Im Chhun Lim, who gave the keynote address.

Other companies that received multiple nods include: Habitat, which is vying for three awards including Best Condo Development (Phnom Penh); twice-nominated Courtyard by Marriott Phnom Penh from developer Khou Investment Co., Ltd; and Les Bijoux d'Angkor, which is up for two awards.

“Cambodia is a small but certainly fast-moving market, with plenty of room for everyone, and it’s a delight to see these returning and new developers joining the Asia Property Awards,” says Terry Blackburn, founder and managing director of the PropertyGuru Asia Property Awards.

“There has always been a huge potential in Cambodia real estate, especially in the affordable housing segment, given that the Cambodian finance sector is more consolidated compared to other neighbouring countries in ASEAN,” he continues. “The Awards programme gives the local industry a big push for innovation and opportunity to continue raising the bar of excellence.”

Before the much-anticipated gala dinner and ceremony, the editors of Property Report will also name Cambodia’s Real Estate Personality of Year, whose influence and achievements resonate across the kingdom.

Tickets and partnership opportunities for the Cambodia Property Awards 2017 are still available. For details, email info@asiapropertyawards.com or call +66 (02) 204 9555.

Below is the full shortlist of the PropertyGuru Cambodia Property Awards 2017:

More information are also available on the official website: AsiaPropertyAwards.com/Cambodia-Property-Awards/

Borey Peng Houth, winner of the Best Developer (Cambodia) title at the first-ever Cambodia Property Awards, returns with a single nomination for its critically-acclaimed Grand Star Platinum project in the Best Housing Development (Phnom Penh) category. Already a double winner in 2016, Grand Star Platinum enters the awards race again due to further development and construction in the property.