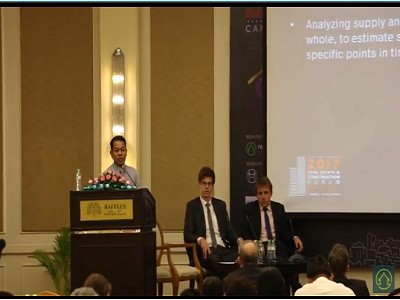 Cambodia Valuation: Times are changing in the Kingdom. And the way transactions are made in the real estate market are changing along with it. Since the property boom, industry professionals have sought ways to improve business in the sector, and while there have been great developments in real estate the past couple of years, there are still gaps that need to be addressed such as the valuation standards in the industry.

This is exactly what key speakers in the 2017 Real Estate and Construction Forum discussed. Speakers include Sorn Seap who is the Director and Founder of Key Real Estate; Gethin Jones, Chief Risk Officer at ANZ Bank; Bou Chanphirou (BC), Deputy Director General for Finance Industry, Ministry of Economy and Finance; Sim Huoy Chhoung, CEO of VTrust; and Amaury Payen, Senior Manager of Knight Frank.

So, what are the gaps that were brought up in the discussion and how does it affect the real estate sector as a whole? Realestate.com.kh gives you the exclusives.

What is Property Valuation?

Mr Sorn started off the discussion by defining valuation as the “process of forming an opinion of value under certain assumption. And in the the real estate market, demand and supply are changing. Property Valuation is the process to estimate the specific exchange price at a specific time.”

He also explains that valuation plays an important role in real estate financing as a means to gauge and give good advice for lenders as to the capacity of a borrower and the long-term benefits and risks of letting the borrower invest in a property. Adding to valuation benefits, mr Sorn adds that it develops lender confidence can help predict the future of the market which can prove as a valuable resource for an investor, stakeholder, lender, buyer and developer.

Mr. Bou said that even with 61 valuation companies and around 100 accredited valuers, there is still a lack of education and human resource in the industry. He added that there is also a great need to improve and create regulations in the industry. He said, “We have a 2005 regulation to issue the license for valuers. And now, this year, we have to upgrade these regulations and to carry the new law.” He also suggested that better enforcement would help greatly.

He proposed that while those are being addressed, Cambodia should open its market to foreign investors. He explained, “Opening the market means challenging the local market to learn from the international ones.” He suggested that foreign companies are able to share their knowledge and invest at the same time.

Mr. Bou also said that valuation plays a role in the banking and insurance industry. And while they are already utilizing valuers, either in-house or for hire, he mentioned that “the scope can be expanded”.

He suggested setting up a commission that will standardize the professional valuers’ use of indemnity insurance.

How does liability work on a practical level in the valuation market of today in Cambodia? And is there a need for compulsory indemnity insurance?

Mr Gethin explained that liability generally protects businesses from claims of bodily or property damage. But he clarified that indemnity insurance provides protection for clients from issues arising from negligence, financial loss or legal entanglement. He also stated that valuers have one of the greatest responsibilities in a transaction.

He said, “It’s an absolute necessity -- whether you’re a developer, banker, or equity financier.  The valuers must be accountable for the valuation they put in front of you.”

He continued, “I’d be very surprised if anyone in this room will accept the valuation without their valuer being funded by indemnity insurance. There are plenty of valuers in the market with that and it would be unwise to proceed without it.”

He also talked about how it is legally beneficial; he explained that although the courts are slow in Cambodia, being covered by indemnity gives assurance to the person being given the valuation that they can pursue the valuer for negligence. He said that it takes time, but it gives you a better chance legally.

Amaury Payen said that getting indemnity insurance should be compulsory to provide better quality valuations since valuers would be liable for the value they appraise the property for.

How does quality valuation assist in creating new projects?

Mr Amaury suggested that valuation has to be taken from the very initial steps of the project. He explained that valuers have in-depth knowledge of the market and that successful projects come down to appropriate researches. According to him, the reason we see some developments put on hold because is due to inaccurate research.

Mr Gethin expanded on this idea and mentioned that quality valuation begets quality lending. And a quality valuer is one who works off of good data sources, insurance, a good track record, a good reputation, and someone who’s well-regarded by the industry. He emphasized that valuation is an integral part of the risk analysis of financial institutions too in order to provide good financial packages for developers and investors.

Mr Sorn mentioned that even though good market data can help in producing good quality valuation, it still somehow transcends that premise. He says that data is just a complement to the knowledge of the valuer and how he uses that knowledge and data together to form informed opinions on new and even existing developments. He says that a good valuer should also be able to verify information in order to make quality valuation.

What is the most crucial change that is needed for the market now?

Mr Sorn said that because data is only gathered from companies, there is still no central data to work with. This makes it difficult for valuers because sometimes the data gathered varies. Payen agreed adding that this has been an ongoing issue and has actually been looked into as far back as three years ago.

Mr Bou said that in order for this to happen, there needs to be a common model first. He explained that the reason why data varies is because the data gathering model varies as well. In response, Mr Sorn suggested setting up a team with representatives from different industries. Mr Bou then mentioned having a committee already set up. But he admitted that this can still be refined and more representatives are still being considered.

Mr Gethin, on the other hand, wanted to see stricter enforcement of regulations against non-certified low quality valuers and towards professional responsibilities and compliance. He mentioned that they should not be tolerated as they affect the industry greatly.

Amaury emphasized a strong desire for better education of upcoming and existing valuers. He adds that creating a career path for valuers will encourage them not only to pursue employment in the industry but to also follow best practices in it.

Bou  said that they are also working on separating agent and valuer licenses. But while that’s not in place, he said that more actions will be directed towards implementing an industry standard and developing a code of ethics.

There is still admittedly much to be done in the Cambodia Valuation sector. But the fact that these gaps are already being recognized by experts and influencers of the industry means that there is a great likelihood that these will get resolved in the near future.

How Can Siem Reap Expand Into the Future?
80 views



