The past two decades alone have seen monumental changes in the different aspects of Cambodian economy and society. One of the sectors that have benefited from all these changes is the real estate market. CBRE Cambodia states that “the global value of commercial real estate investment transactions stayed above $200 billion in Q3 2016, suggesting that the market has stabilized after a drop in transactions at the start of the year.”

Marc Townsend –Managing Director of CBRE Cambodia and Vietnam – discusses some of the factors affecting the market’s growth in his presentation on “Is Cambodia’s Residential Market a Target for Investment?” 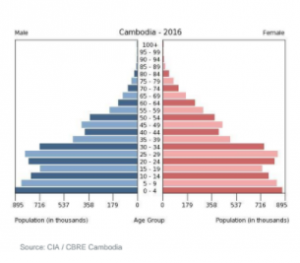 Demographics say a lot about any potential behavior changes in the Real Estate market. Townsend says that Cambodia does not have a greying population too. He explains that “as a residential developer, this is an eye-watering opportunity.” He adds, “Cambodia is the least urban population. That is going to change. And obviously, once people have graduated from the universities in Phnom Penh, they’re not going to go back to planting rice in the fields. There are 53 universities in Hanoi, I think there are 65 in Ho Chi Minh. And I’m sure the kids that come from the Delta will never go back to the Delta. And again, this will happen here. And obviously, for those of you who are residential developers, that is your target market at the appropriate price, at the appropriate location in the years to come.” He also says that higher expenditure growth is a good omen for developers. 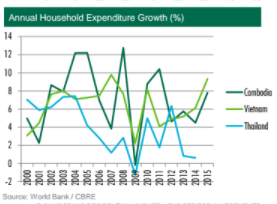 Townsend talked about an upcoming investment surge as well. He jokes, “I choked over my bacon this morning when I read these numbers and I’m assuming that they’re well researched.” He explains that there’s an estimated “7.6 billion dollars coming into real estate in Q3. That is a huge number.” He also said that local developers were initially at the forefront of the real estate sector. This has changed significantly throughout the years. He said that “the market has always been dominated by Cambodian developers. But then as it gets bigger, and wider, and deeper, and includes other cities and other types of property, Taiwanese, South Korean, Malaysian, Singaporean, and now, obviously, Chinese developers get involved as well.”

Townsend explains that traffic is a big problem in Cambodia and it can take its hold on the market. He said that “it’s all very well for land to be acquired and projects to be built. It’s really depending on the infrastructure.” He recalls having to travel around an hour from a nearby area to the airport.  He says that “the reality is that is what’s going to be your life for the next five to ten years before they start to really join up the underpasses and the overpasses. An underpass or overpass takes, what, a year and a half to build. It screws the traffic up for a while. And that’s life in the city that’s growing with a population that will probably double in the next five years.”

He adds that Cambodia is fortunate to only be dealing with traffic and not pollution too. He warns that “For the moment though, you’ve just got traffic to cope with and not pollution. It will come as your industries start to change.”

Learn more about the Cambodia investment climate in our in depth guides!