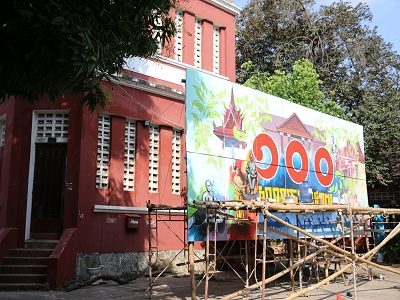 The Chroy Changvar area is a fast up-and-comer for the Phnom Penh residential market, offering fresh air and room to move compared to the inner city districts - an attractive proposition for both expats and local families. New development housing projects continue to launch month on month, hand in hand with commercial ventures - and land prices have been rising steadily year on year.

During the 19th National Cultural Day in Phnom Penh on the 3rd of March 2017, Samdech Techo Hun Sen stated the location of the Royal University of Fine Arts (RUFA) would soon change from its current location next to National Museum of Cambodia in Sangkat Daun Penh, moving instead to Chroy Changvar. The prime minister said that the project will cost approximately $12 million.

The new RUFA on Chroy Changvar will occupy a total area of ​​3 hectares. In addition, the government has set aside another hectare of land next to the University to build a cultural center for concerts and theater performances.

The relocation of the Royal University of Fine Arts has irked some of the general public, who have raised concerns in regards to the university’s history in the area and argued that the relocation might change the school’s identity. Additionally, some students have expressed dissatisfaction due to the commute time from the inner city.

Mr. Noy ​​Samnang, a 2nd year student at the RUFA, said that, “I started my learning here and I’m still studying here. I would be very sad if the university will relocate because I have lots of memories in this place. And it’s quite far for me. I will have to adapt to a new place again.”

However, the government is convinced that the current Royal University of Fine Arts is very narrow and is planning to use the area of the university to expand the current space of the Museum.

Mr. Nong Samedy, a former student of RUFA, said that he will be disappointed if the university is relocated to Chroy Changvar because this is the pioneer university of Cambodia and has been standing for in this area for 100 years.

However, he also mentioned that if the government is aiming to expand the size of the campus and preserve the original buildings, he will support the government’s action. Samedy added that this relocation may be positive, if the new university will be equipped with a wider range of learning materials and facilities.

Mr. In Sitha, Advisor at VTrust Property Co., Ltd., says that in terms of real estate, this is a good sign and will potentially boost the growth of the real estate market of the area.

Norton University is also situated on Chroy Changvar - and according to Mr Setha - before Norton arrived there, there was no business and few people in general. But after the establishment of Norton University, a lot of businesses and economic activities have blossomed around this area.

Mr. Setha also mentioned that this will also drive the housing sector outside the city towards the Chroy Changvar area, where housing and land prices remain low and relatively affordable for local families.

Ms. Phoeung Sakona, Minister of Culture and Fine Arts, confirmed that this project will start its construction this coming April 2017 and it will take around three years to be completed.

Check out the best Chroy Changvar listings on Realestate.com.kh