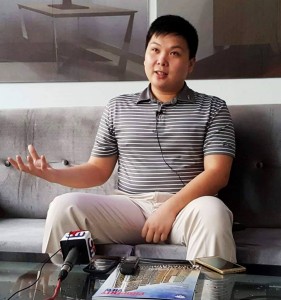 Sam Yang, the company’s CEO, said during a recent company promotional event that Eastland is working with a local underwriter to prepare to float shares on the Cambodian Stock Exchange (CSX). “The application will be ready early next year and the company will have an initial public offering in September next year,” he said, adding that Eastland intends to be the first foreign-registered company to list on the CSX. Yang said that the purpose of listing was not just about raising funds for its projects, but also to raise the confidence of its investors and allow them to be part of a high-standard property firm. Read a related article: Knight Frank authorized to conduct IPO valuations.  Eastland Development (HK) Ltd is a branch of China’s Guangzhou Yuetai Group, a real estate developer with over $1.2 billion in assets. Eastland is focused on real estate development in Cambodia, and claims to have invested $60 million in three projects here: East One Apartments, East View Residence and East Commercial Center (ECC). Phnom Penh Securities, the underwriter for the IPO according to Yang, could not be reached for comment yesterday. Sou Socheat, director-general of the Securities and Exchange Commission of Cambodia (SECC), said he had not received any letter or official documents from the Eastland yet, though he welcomed its intention to join the stock market in Cambodia. He said some foreign-registered companies have submitted letters of interest to list on the CSX, though nothing is official yet. In addition, the SECC is also reviewing the applications of three local companies that intend to list within the next year, namely Phnom Penh Special Economic Zone (PPSEZ), TY Fashion and Sihanoukville Autonomous Port. Sor Chandara, Phnom Penh Post Want to invest with Eastland? Check out their properties for sale on Realestate.com.kh: East One Apartments, East View Residence and East Commercial Center (ECC).