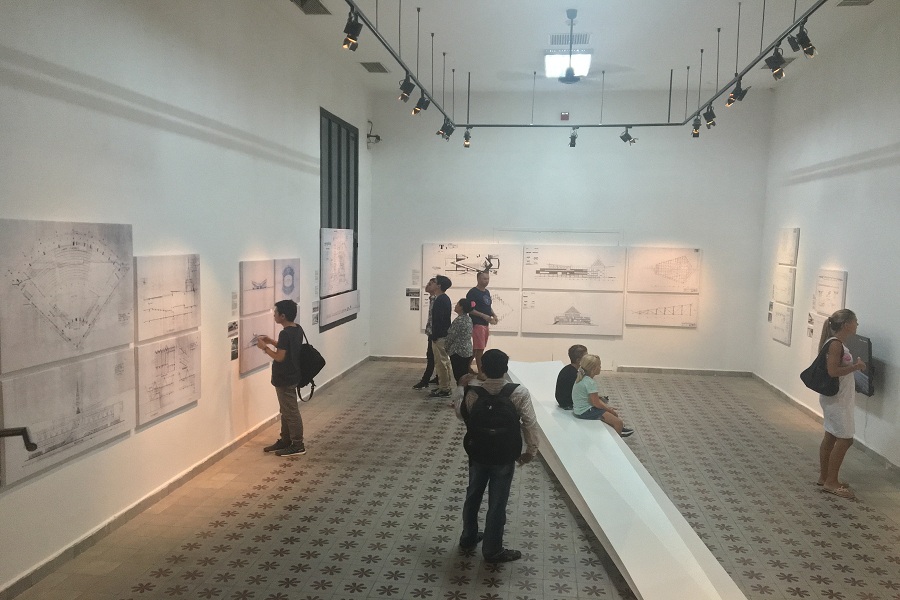 Khmer architecture was very popular during the 1960s, especially the projects of Vann Molyvann, who built many architectural masterpieces in both Cambodia and abroad. During the 60’s, local architects such as Molyvann were heavily influenced by another Asian country, Japan.

To showcase the fusion of these two cultures, an exhibition on New Khmer and Japanese Architecture was organized through the cooperation between the Environmental Global Hub, the Kyushu University of Japan, the Cambodian Ministry of Culture and Fine Arts, the Cambodian National Museum, The Japan Foundation and with the support of Royal University of Cambodia.

This exhibition was held on the 4th of March for its first showing, and will be open to the public again on the 16th of March at the National Museum of Cambodia, Phnom Penh.

The exhibition aims to reveal the role of the Japanese experts who were involved with Vann Molyvann’s and other Cambodian architects’ projects in the mid-twentieth century, from the design phase to the final construction, and broader urban planning initiatives underway at that time. It also aims to show the diversity of the collaboration occurring during the period of the 1950s and 60s.

When explaining the purpose of the exhibition, Masaaki Iwamoto, assistant professor at the Kyushu University, said that this is their first exhibition in Cambodia, and will focus on the new generation, namely the youth and students -- especially, those who majored in architecture. By doing so, the new generation can learn from the 1950-60’s architectural styles and themes.

The photography and information on display focusses on nine projects, seven of which have already been completed. The projects being exhibited are the Osaka Expo Cambodia Pavilion, the Chroy Changva Bridge, the Agricultural, Pastoral and Medical Centres, Preah Suramarit National Theatre, the Bassac Riverfront Masterplan (which includes the White Building), the Sihanoukville Master Plan, and the Chaktomuk Conference Hall.  And the two construction projects which have not been completed, include the Parliament -- under the partnership with Obayashi Corporation -- and the Olympic Stadium.

Mr. Keo Sitha, a 3rd year student in architecture, in attendance at the exhibition said, “this was a good opportunity for him to see the different project design layouts of Molyvann.” He added that his interest for the design of each project is mainly on how designing works, since it is very detailed and complex, and not well taught at school.

Somanith, another architecture student currently on his 5th year at the exhibition’s first showing on the 4th, was particularly impressed by the designs and commented, “What I really appreciate of Mr. Vann Molyvann is that he designed all these projects by only hand drawing.​ It is very hard to do on a PC, so I can’t imagine doing so by hand.”

Mr. Hun Chansan, director of Re-edge architecture and design​, said that, “I think this exhibition is a good showcase that architecture is about collaboration, and we can learn a lot from those sectional drawings being exhibited. It already inspired me to look into designing my own projects with the layout and section concurrently.”

Chansan continued, “it seems Japan and Cambodia have gone through a similar phase. Cambodia needs to take time to discover talents and produce human resource that will be needed to build another era of architectural masterpieces. I hope as the country is developing, we will discover the value of architects and what we can do for the country. As part of the new generation of architects in the country I hope to make an impact and inspire many to do so.”