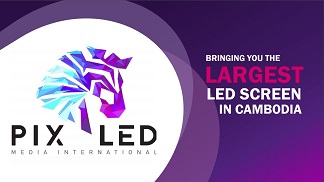 There’s no denying that Phnom Penh’s growth is evident from the number of property developments and the expanding variety of commercial establishments servicing the Cambodian people. Phnom Penh, despite its rapid progress, is found wanting in the pretty lights department.

But that’s all about to change.

PixLed Media Int’l placed its LED screen strategically nearby the Embassy of Australia, AEON Mall, Naga World, and Diamond Island, to name a few proximal landmarks in Phnom Penh. These high-traffic areas, in terms of foot and cars, guarantee advertisers millions of views on a regular basis.

Despite PixLed Media Int’l is an advertising company, its tag “biggest screen in Cambodia” is not just a simple marketing phrase. They constructed a full definition LED screen spanning almost 1000sqm across - a surface area bigger than some land properties in Phnom Penh. This makes it 12 times bigger than the previously biggest LED screen in the city.

Their high pixel LED screen is calibrated to make advertisers’ images look sharper and overall better than other LED advertisements in the city. PixLed Media Int’l understands that consumers look for signs that the ad is legitimate, and they know that the most convincing proof is a professional-looking outfit.

By itself, the LED screen will attract attention. It’s big and it’s beautiful. But it’s strategic location grants it access to the many different walks of life in Phnom Penh, giving advertisers the largest possible exposure for whatever market they’re trying to reach. 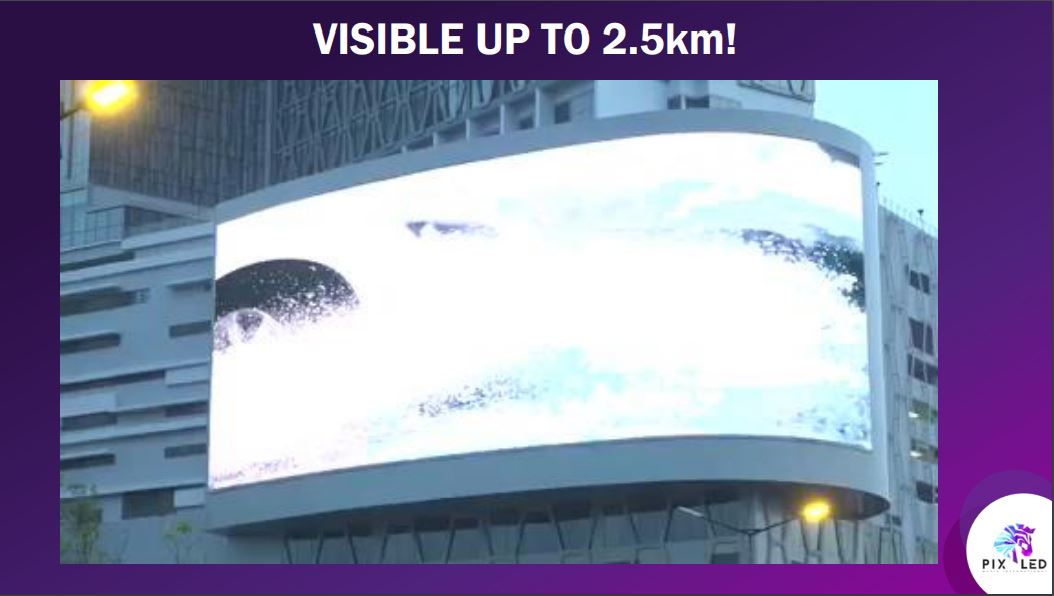 At present, no other digital screen in Phnom Penh can visually reach passers-by 2.5km away!

PixLed Media International is a data-and-research driven advertising company. Every aspect of the LED screen, from its location to its composition were carefully considered to deliver the best possible results for their clients. One study they cite is by Irfan Khan, CEO of Skykit, a digital signage solutions provider. The first key take away being:

Digital signage makes an impression. Of that 70 % of people who recall seeing a digital video display in the past months, 47% specifically recall seeing an ad. That’s nearly half of all respondents.

Passers-by do spend the time to look

In a study conducted in Sweden, it found that drivers spend significantly longer looking at the digital billboards they pass by - longer than traditional billboards. After all, a bright, colorful, and animated display would be more eye-catching. And Phnom Penh’s traffic woes will certainly have drivers looking for much longer!

In the age of online advertising, most companies have allotted significant resources in making their brands known on the internet. However, according to Skykit’s research, 71% of respondents felt advertising on digital billboards stood out more than online ads, and 46%^said they felt that these were more prominents than even television ads.

Ever thought of getting something sweet but aren’t sure of what you want? And all of a sudden, an ad for a candy bar suddenly pops up in front of you, the next thing you know, you’ve stopped at a convenience store to get that candy bar, specifically. If you’ve had a similar experience, then you’ve joined 19% of consumers who claim to have made an unplanned/impulsive purchase of a product they’ve seen advertised digitally.

PixLed Media International will definitely give companies and their marketing a much-needed boost. The Kingdom’s growth has been phenomenal and it’s fortunate to see that modern companies and their technologies are pouring into the country every year.

If you’re looking to market with PixLed Media International, and take advantage of their market expertise, you may reach them through the information below: