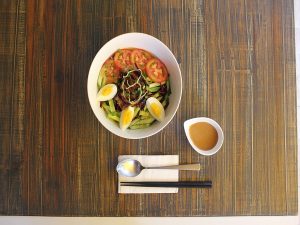 Toul Tum Poung, better known to most expats as Russian Market, has long been a destination for shopping and eating for locals and tourists - the district being centered by a large traditional wet market, full of stalls stocking everything from motorbike parts to silk, herbs and spices to electronics, and almost anything in between; ideal for anyone in search of a sensory shopping experience.

Yet in the last few years, Toul Tum Poung (TTP) has moved beyond a stopover destination and transformed into a hotspot for expats living in Phnom Penh. It has also attracted attention from affluent locals, some seeking a home closer to their inner city workplace and others looking set up retail or accommodation venues.

With this inflow of money and foot traffic, retailers are flocking to the area to launch trendy bars, restaurants, gyms and fashion boutiques, with innovation and influences being drawn from the eclectic community here. Meanwhile, apartment and condo developers are also centering in on the area, given the popularity of the area for expat renters and buyers.

The cause of this newfound popularity can be traced to a rise in rents and land prices in the Beong Keng Kang (BKK) districts; this area of Phnom Penh once being the first-choice for this class of residents. Yet as condo and hotel developers have dominated land purchases in the BKK suburbs, land prices have risen as high as $7,000 per square meter; and with some of the highest occupancy rates in the capital, rents have jumped significantly also.

Celia Boyd, co-owner of LOT 369 cafe and bar in TTP, mentions that “a lot of expats have started moving to TTP because it was still fairly central, but not nearly as expensive as BKK, and in particular BKK1. There are still some great markets, shops and restaurants around, but the area still has a local Cambodian charm.”

And unlike other areas in central Phnom Penh, TTP isn’t awash with backpackers, says Boyd: “Tourists come to the markets, but it's not an area for backpackers like street 271, or Siem Reap's Pub street, for example.”

“It’s also easy to get around,” continues Boyd, “most places are walking distance from each other in this area, and there's a nice community feel to it.”

Brendan McCarthy, proprietor at Long After Dark bar and eatery, notes that, “Life in Russian Market tends to operate at a slightly gentler pace, the community is extremely friendly and it has its own unique rhythm that resonates well with us.”

“More and more interesting eating, drinking and shopping options are popping up all the time which is adding to the vibrancy of the suburb,” adds McCarthy, “and I think that the same neighbourhood charm that drew us to the area initially is responsible for this growth.”

The boutique fashion industry is rising across the capital city in waves, and none least in TTP. There are more and more boutique vendors such as ESQ, a trendy clothes shop opposite the main market, are opening every month, ideal for those who want a western shopping experience, complete with aircon and fitting rooms. For the best bargains though, or tailored shoes and clothes, stroll around the central Russian market - and get ready to haggle!

Seng Hour, co-owner and grill chef at the Toul Tom Poung Grilled Seafood BBQ restaurant, opened his shop in 2012 on the side of the main market. These days Seng’s restaurant serves up over 80 kilograms of freshly barbequed seafood - crabs, fish, shrimp, lobster, shellfish and squid - every night of the week.

Seng says his secret to success has been the quality and freshness of his food, fast service and high-hygiene standards, allowing his restaurant to outlive many around him.

But Seng say’s it wasn’t always so busy: “The TTP area is completely different than it was just two years ago. Before only few people from around the Russian market came to eat; now local people from Toul Kork and Sen Sok come together with friends and family just to visit our restaurant.”

Seng notes that foreigners didn’t really know about his restaurant before, but now “we have lots of foreign diners because they are living in apartments in the area. And more and more serviced apartments are launching in TTP these days.”

Yet, as comes with any suburban development, residents of Toul Tum Poung may start to feel its gentrification when it comes to rental rates and sale prices in coming years - just as those in BKK experienced before.

Keiko Fujita-Hix, co-founder and owner of Sesame Noodle Bar in Toul Tum Poung, notes that since her restaurant opened in 2012, rents have risen over 50%. Meanwhile, in her venue’s case, the restaurant will soon have to move location - as the landlord looks to convert the section into a new apartment complex development site.

But Keiko notes that Sesame will definitely stay put in Toul Tum Poung, even if they need to move venue.

“There is a unique community spirit that exists here,” says Keiko, “and a community that our business has invested in - we are close to workers’ family homes, our loyal clientele of diners, and other local businesses that mutually support us, and we wouldn’t want to move anywhere else.”

Check out the best properties for rent in Toul Tum Poung on Realestate.com.kh now!