The 38-road project in Siem Reap is a massive undertaking designed to improve the city's tourism and overall economic prospects. Photo by K/T Khem Sovannara

The 38-road project in Siem Reap is seeing significant progress since its groundbreaking in late November 2020. The infrastructure project is constructing and rehabilitating roads in the city along with building and repairing rainwater drainage and wastewater purification systems.

Minister of Public Works and Transport, Sun Chanthol emphasized the project’s focus on “quality, efficiency, and timeliness”. He adds that the roads will be made suitable for regular traffic and trucks commonly passing through the city’s roads.

Approved in September 2020 at an estimated cost of $150 million, the project comes at a convenient time when the city’s roads are less busy due to the lack of tourists.

According to a report by the Ministry of Tourism, tourists arriving at Siem Reap International Airport are down by 84% as of November 2020. Visitors arriving by land are similarly down by 71% over the same period.

Given its tourism lull, the government has taken the initiative to turn it into an opportunity to improve Siem Reap’s tourism prospects. The 38-road project is part of the Siem Reap Tourism Development Master Plan 2020-2035, conceived earlier in 2020 aiming to transform the country’s primary tourism hub into one that can accommodate the surge of travel once COVID-19 is fully under control.

Last January 29, Minister of Defense Samdech Pich Sena Tea Banh, with Director-General of the Electricite de Cambodge (EDC) Keo Rattanak, personally inspected the progress on the 38-road road project in Siem Reap. Officials report that the project is well on its way at 17% completion (as of last week of January) and on schedule to meet its year-end completion date. 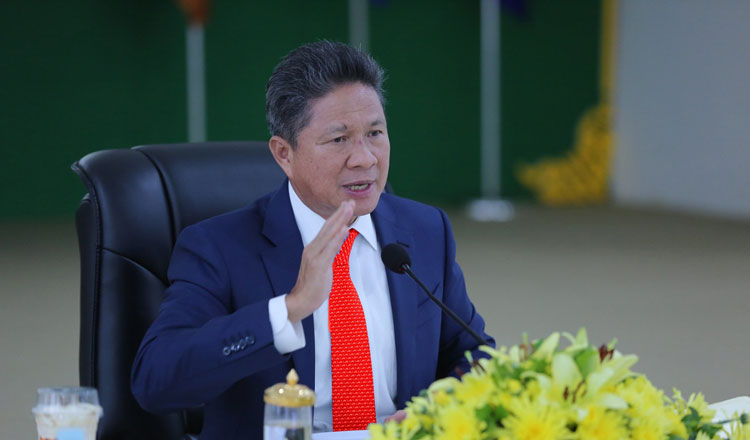 MPWT Minister Sun Chanthol speaking with senior officials and relevant stakeholders during a conference regarding the 38-road project. Photo by Khmer Times.

In a report by the Khmer Times, MPWT Minister Sun Chanthol warned there will be no payment to the construction company of the 38-road project in Siem Reap if it was found uncompliant with technical standards and the technical construction guidebook.