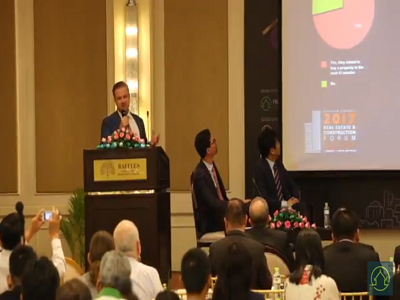 Kicking off the 1st quarter of the year, the 2017 Real Estate & Construction Forum gathered property experts and enthusiasts from all over Cambodia and the world to achieve a common purpose. To advance in their knowledge of the industry. As such, speakers like Tom O’Sullivan – CEO of Realestate.com.kh – came out to talk about matters of grave importance. And one of those is the rapid growth and potential of Sihanoukville.

Sihanoukville Investment prospects appear to be growing steadily in 2017. But what is so special about Sihanoukville and why should people start taking it seriously? Realestate.com.kh gives you the lowdown from Tom O’Sullivan himself.

For one, O’Sullivan said that initial steps of the proposed master plan are already being completed. He mentioned that there’s actually a plan to conserve Sihanoukville’s natural resources and although this is giving difficulties for some businesses, ultimately it will benefit Sihanoukville. New developments and international names already include D’Seaview, Blue Bay, Royal Bayview, Sunshine Bay, Novotel, Marriott, Grand Mercure, Alila, and the Six Senses.

Casinos are also making their way to Sihanoukville, granting multiple licenses to build and operate in this area. O’Sullivan mentioned that these developments build the confidence of investors and developers.

He also added that infrastructures such as highways, roads, and port expansions are driving additional interest for other businesses because they not only aid travelers but connect other areas to Sihanoukville to either access its beaches or the SSEZ which employ thousands upon thousands of employees.

Find out more about Sihanoukville Investment in our comprehensive location profile!

Have these changes been visible to the consumers?

In an attempt to look at the situation from another angle, O’Sullivan explains that Realestate.com.kh also conducted its own research to get a better understanding of the perceptions of the consumers.

Around 5,000 people took part in the survey, which O’Sullivan says is a testament to the continued interest in properties in the country. The survey also showed that around 73% of the survey respondents are interested in buying in the next six months, and the majority estimates a budget of $50,000.

With over a million people surfing the Realestate.com.kh site yearly, analytics have revealed that while Phnom Penh remains the most popular area for property seekers; However, taking 2nd place for the most searched area is Sihanoukville province.

This is substantiated by inquiries from their customer base which O’Sullivan says grew to 25% in 2017, from 10% last year. He stated that most of those inquiries are from customers wishing to buy in Sihanoukville, especially for land. Most of these are Chinese investors. O’Sullivan quoted Juwai.com, a famous Chinese property portal, which suggests that 57% of Chinese consumers actually plan to purchase properties in countries in which they’re traveling to.

So, will Sihanoukville overtake Phnom Penh?

To realize the magnitude of the market slowly shifting towards the Sihanouk province, O’Sullivan first explains that the Phnom Penh market still enjoys a great property climate. In fact, the consumer sentiment survey shows that Phnom Penh is still the "first choice for those interested in purchasing a property" – leading at 65%, whereas Sihanoukville is at 2nd place with 15%.

All in all, Sihanoukville has an attractive property market not because it’s safer for investment than in Phnom Penh. It is an attractive market because it is continuously building itself with its own character, with both a tourism and industrial focus, setting it apart from both Phnom Penh and Siem Reap.

Thinking of investing in Sihanoukville? Look at the latest developments in Cambodia's premier resort town now!