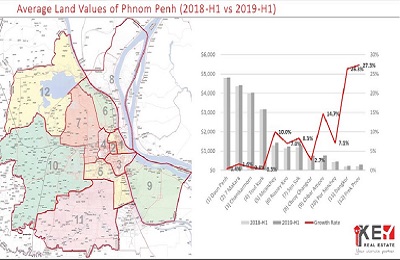 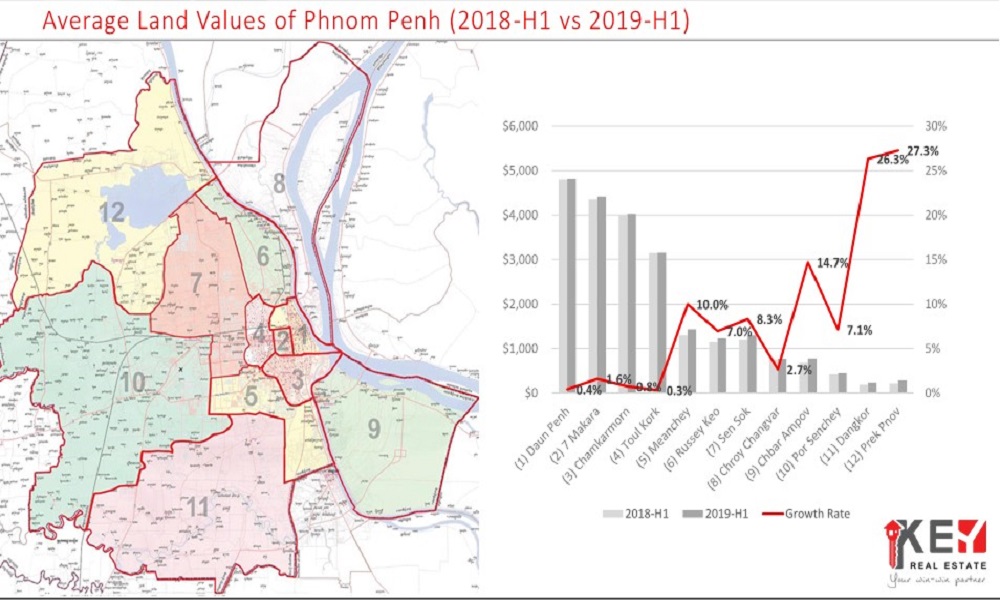 Three outer districts of Phnom Penh topped the list of rising land prices for the first half of 2019, according to a report from Key Real Estate.

The document, released earlier this week, stated that Prek Pnov, Dangkor and Chbar Ampov districts were the areas that saw the biggest jump in land prices so far this year.

Prek Pnov district rates grew by over 27 percent in the first six months of the year, according to the report. A specific example was given for central land in the district’s eponymous commune. Plots there started 2019 at between $280 and $1,500 per square metre. Now, the same plots are going for between $300 and $1,700 per square metre.

Dangkor district came up in second place. Located on the south end of the city, the district still has some of the most affordable land in the city. Average prices there grew by over 26 percent over the first half of the year, however. Cheung Ek and Dangkor communes saw huge growth, plots in those areas rose to over $2,000 per square metres on the high end.

Prataslang and Sak Sampeou communes remain some of the cheapest areas in Dangkor district. There plots along the main roads can be found for as little as $40 per square metre.

He added that Prek Pnov is becoming an investment hotspot, as infrastructure in the area grows near the ring road, National Road 51 and the railway station at Bandoeng Market.

“Developments in neighbouring Sen Sok and Chroy Changvar districts have led to increases in land prices as well,” he said.

Reflecting on the growth in Chbar Ampov, Seap mentioned the recent 200-hectare expansion of Borey Peng Hout, which has attracted plenty of attention to the area.

Dangkor district, he said, owes its success to the development of the second and third ring roads, Hun Sen Boulevard, new residential complexes and the upcoming Aeon 3 shopping centre.

“I believe the city is expanding, that’s why property values are rising in the outer areas,” Seap said.

He contrasted this to land prices in the central districts of Phnom Penh. Land prices there are relatively stable.