Experts have said that the group of islands off the coast of Cambodia will be able to help the real estate and tourism industry rise faster if development companies are willing to develop them to be more attractive to guests.

During the past two years, there were 2 developers who announced plans to develop the islands in the province of Sihanoukville to become a favorite destination for tourists, both national and international.

Kim Heang, the president of the CVEA and CEO of Khmer Real Estate, said that Cambodia is a country with many islands located in its coastal area. But so far, there doesn’t seem to be any significant changes you can see in these islands, even if there are already private developers licensed by the Cambodian government.

He continues by saying that even with the licensing by the government, so far, some real estate investment companies have not used a lot of money to develop the islands. In other cases, some developers just sell out to another developer.

He said that “when the project owners spend the money to develop maritime islands, then Cambodia will attract more tourists and investors. And also, the land price can potentially increase. The developer can start building infrastructure on the island to capture a higher market value of real estate after the roads, bridge, and travel become more convenient and comfortable.”

He suggested that “if the company retains the right to invest in the island, they should work on the development of infrastructure because transportation will be taking guests around the island.”

Chrek Soknim, CEO of Century 21 Mekong, said that a clear plan of development will bring out the potential of the area. And when foreign investors come to invest, it will be more profitable for Cambodia. Development in the island area can easily be done because the natural view of the island is very attractive.

Vorn Chanthorn, CEO of Town City Real Estate said that investment on the huge islands need a lot of capital. The

government also requires those companies to abide by the national and international environmental standards. Investment is not just for the sake of investing, but there’s also a need for proper, clear, and detailed inspections. Otherwise, it will damage the environment in the islands. So, there’s a requirement of a detailed research before retaining the right developers to invest.

He said that “The development of the island is a positive thing for the tourism realm of Cambodia. If a company has the right to invest in the island, they should build bridges and if possible, build a resort or holiday home as well.

Mr. In Sitha, director of business development of VTrust Appraisal Co., Ltd., said that “Real estate developers cannot develop the  island unless they get the license for long-term development - because a large amount of capital is needed to build infrastructures here. In such investments, it helps promote the beautiful island view for tourism and helps to employ citizens with jobs from food processing companies, souvenir shops, vendors, hotels, guesthouse services, and other entertainment places.

There are 64 islands in Cambodia, where 54 are situated in the territory of the Sihanoukville Province. Koh and the rest of these islands are located in the Koh Kong, Kep and Kampot provinces, but so far 28 of these islands totally occupy an area of more than 18,000 hectares. These were leased to private companies as investments to turn them into tourist sites with luxury and attractions in mind. But in practice, we found that only a few islands are developed gradually as a tourist area such as Koh Pos island, Koh Dek Koul, Koh Song Saa, Koh Tang, and Koh Rong.

In late 2015, the Royal Group of Oknha Kith Meng started the construction of a 5-star hotel called “The Royal Sands”, located on Koh Rong in Sihanoukville. After the project is completed, a new hope springs to attract more tourist to come.

Check out the Cambodian Investment guide and learn more!

This story was featured in the September 2016 print edition of PROPERTY VIEW magazine, produced by the CVEA.

Realestate.com.kh is very proud to support the CVEA’s Property View publication. For more information about joining the Cambodian Valuers and Estate Agents Association (CVEA) please click here. And, if you are interested in advertising placement or advertorial in the next edition of Property View Magazine, please contact Mr. Virith via email: virith007@yahoo.com Or call: 078 959 567  or 098 66 26 68 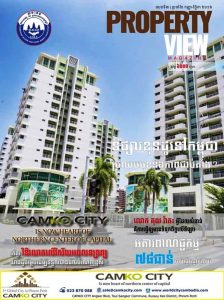