Cambodia condo outlook 2020 and beyond 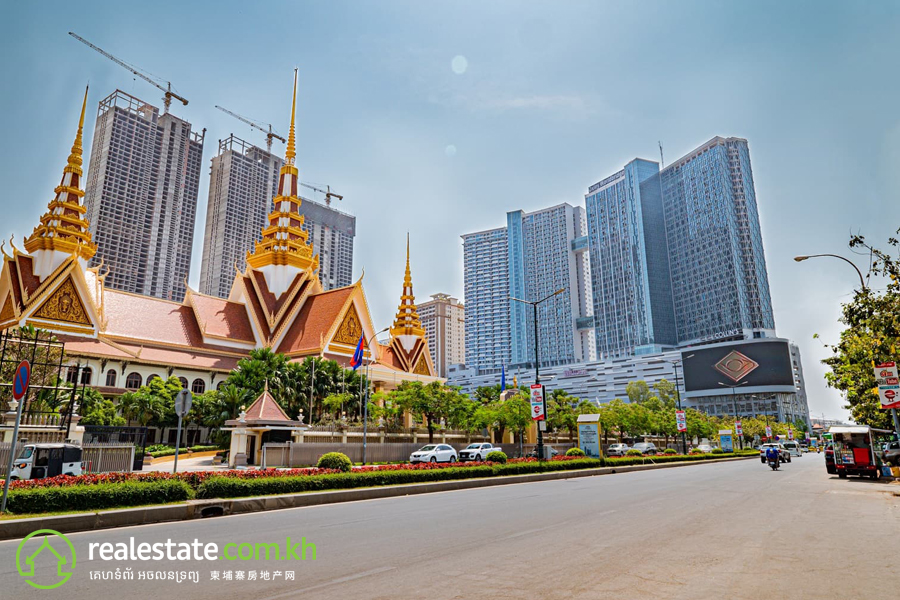 (Cambodia's fast economic rise has put the country in the spotlight of real estate investors from around the world. Realestate.com.kh)

The rise of condominiums in Cambodia, particularly in Phnom Penh, has certainly piqued the interest of local buyers, foreign buyers, and even the international media over the past half-decade. But as the Kingdom enters a new decade, you might be wondering, are condos still trending in Cambodia?

The short answer is: Yes, they still are.

But are they worth the investment? This report will look at price trends and upcoming supplies of condominiums across the Kingdom of Cambodia to help you decide.

A look into Cambodia’s condominium sector 2020 and beyond

Realestate.com.kh tracked over 100 projects across the country and examined the trend of condominium developments up until 2023. As a guide to potential investors (such as yourself), this brief report will breakdown the trend of the projects tracked across the 3 major population centres namely: Phnom Penh, Sihanoukville, and Siem Reap.

The trend of condominium development in each city will be further broken down into popular questions such as: 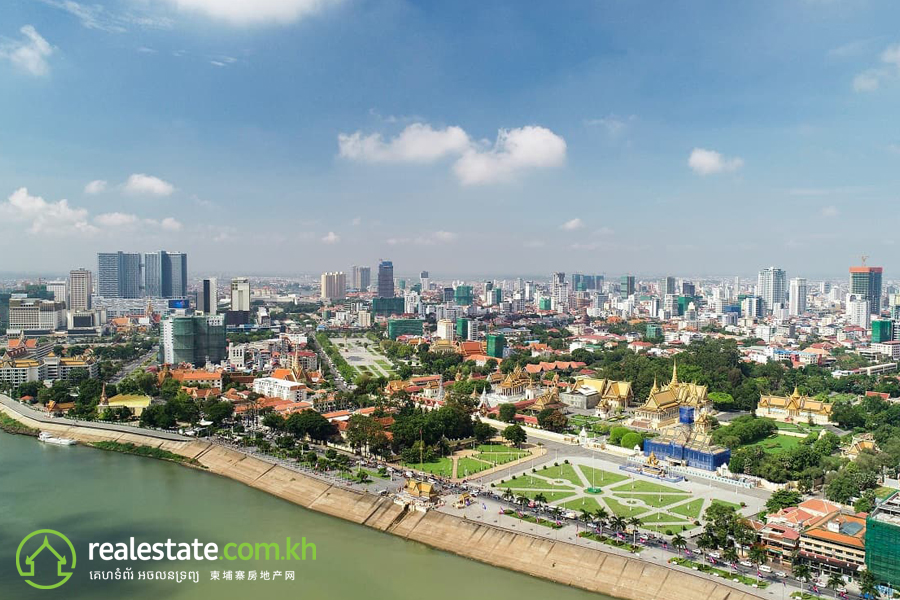 (Phnom Penh is at the epicenter of the massive real estate development in the Kingdom. Realestate.com.kh)

According to Realestate.com.kh’s Consumer Sentiment Survey 2019, 76% of property buyers within Cambodia are looking to purchase property in Phnom Penh. This isn’t too surprising as the city hosts the Kingdom’s seat of government and serves as the home to over 2 million Cambodians and a healthy expatriate population - making the capital not only the political centre, but at the same time, the primary economic hub of the country. This makes it the ideal place for buyers and investors looking for the widest selection of condominiums in Cambodia.

What’s the right price for a condominium in Phnom Penh?

In our 2019 Consumer Sentiment Survey also notes that most respondents earning $1,000 (and above) per month expressed they would be willing to spend anywhere from $75,000 to $150,000 on a residential property. The condominium sector seems to reflect this preference as: 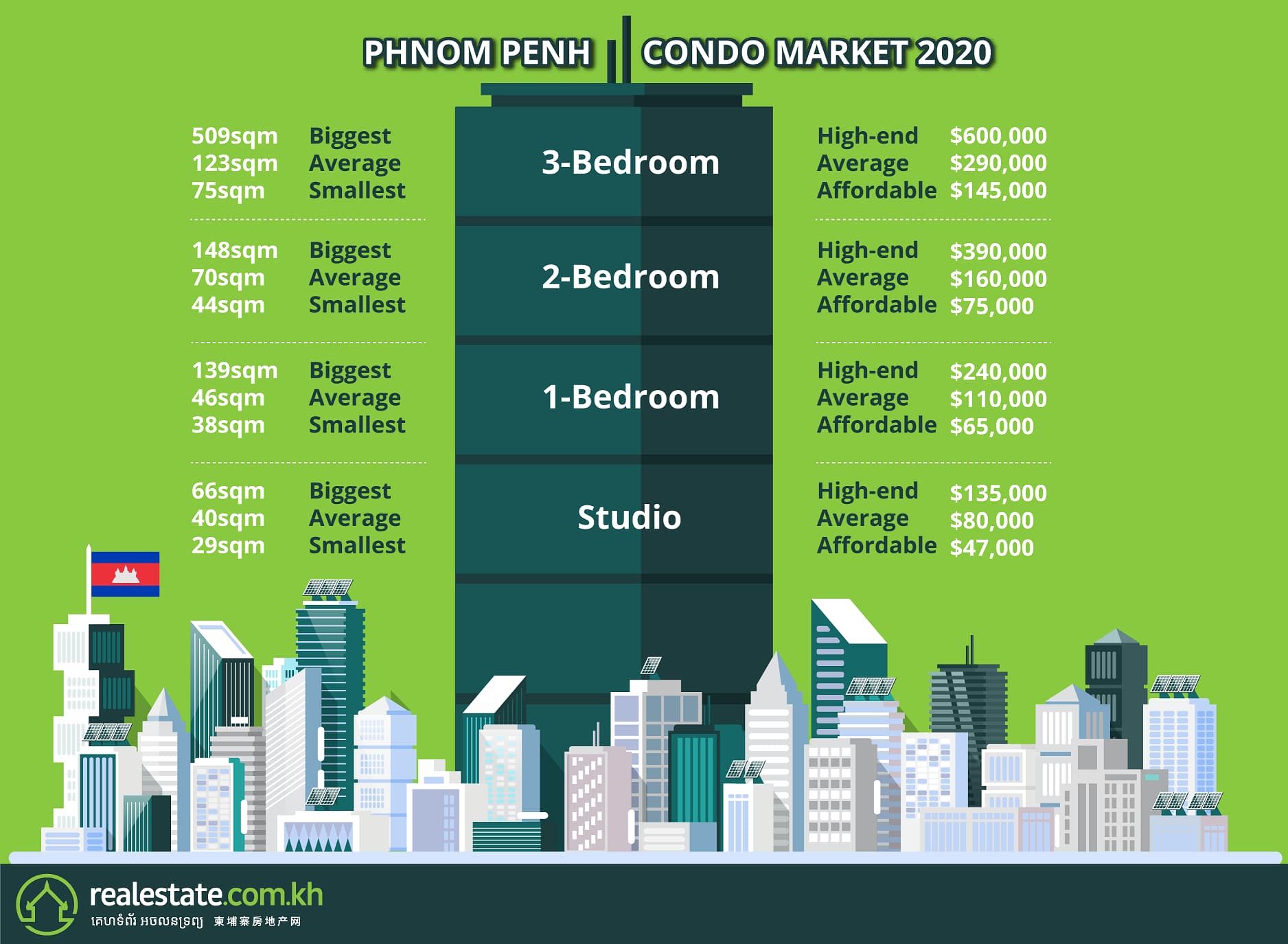 What’s an affordable price for a condominium in Phnom Penh?

You can start looking at The Hexa and Parc 21 Residences for the most affordable condominiums in early 2020.

How much can I spend if I want a top-class condominium in Phnom Penh?

Do you want the best regardless of price? Phnom Penh has luxury offerings with generous living spaces comparable to landed villas. Realestate.com.kh’s data shows that luxury condominiums can go up to ~$240,000 for a 1-bedroom unit in Phnom Penh while a 2-bedroom can cost up to ~$390,000. While the best of the best 3-bedrooms can be purchased for $600,000. Studio units are also available in the luxury range costing around ~$135,000.

If you’re interested in the best and most luxurious residences Phnom Penh has to offer, you can check out R&F City, Prince Huan Yu Center, and Huangshan International.

How many more condominium units are coming to Phnom Penh?

Projects launches, completions, and suspensions happen at different times throughout the year. As such, this part of the report assumes that the projects tracked will meet their announced completion dates. 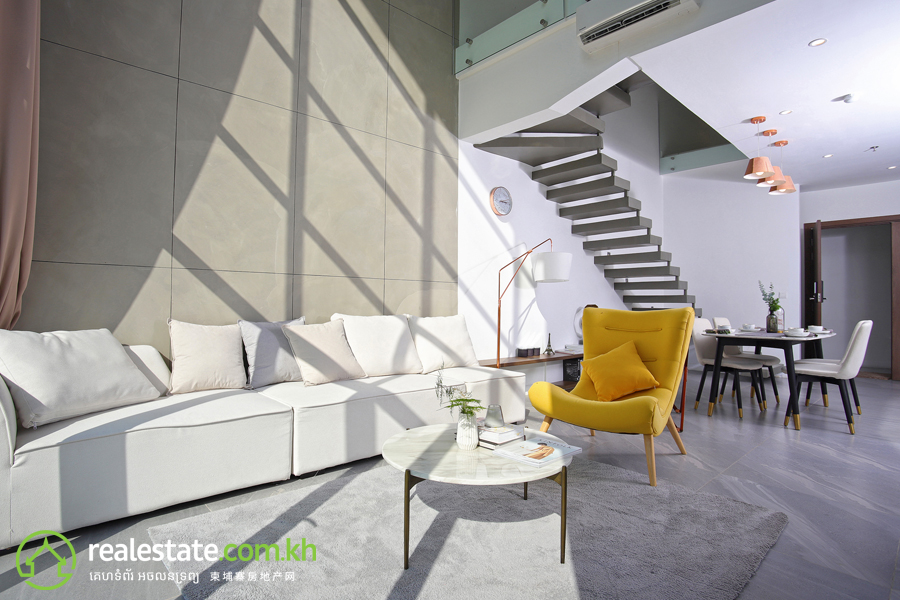 (An illustration of a condominium unit in The Hexa, a new development in Russey Keo district. Realestate.com.kh)

NOTE: New project launches in the latter part of 2020 (not tracked in this report) may announce completion in the immediate future. The descending trend of additional units above is by no means an indicator of receding development.

There is a mechanism in real estate today called Guaranteed Rental Returns (GRR). GRR is defined as rental income guaranteed by the property developer/management to the property purchaser over a specified amount of time.

In Phnom Penh, property developers usually offer 6% to 9% returns over a period of years usually ranging from 2 to 5 years. Simply put, this is the amount of money paid by the developer to the investor depending on agreed-upon intervals. Developers offering GRRs often have mechanisms to find tenants for the property, hence, the investor does not have to worry about renters.

But don’t let numbers do all the talking as shady developers may use GRRs as a means of attracting customers without any intention of following through. GRRs should also not be the primary factor whenever you’re considering buying a rental property as a form of investment. We strongly suggest having a written and notarized contract that includes the agreed-upon rental returns over the specified period of time.

Will condominium prices in Phnom Penh increase next year?

Developers of tracked projects have indicated an increase in prices ranging from 5% to 30% per year. Most developers, however, shared that unit prices would increase by 7% to 8% next year. Buying today might be the best choice if you’re already set on buying a condominium in Phnom Penh.

If you’re not in a rush to move in or if you can wait a year, we suggest buying off-plan condominium property from a reputable developer. Buying off-plan has its benefits, the strongest of which being: lower cost and the opportunity to make small adjustments to your unit. The port city of Sihanoukville has seen massive foreign investment in the past couple of years, especially from Chinese investors. Massive constructions such as condominiums, hotels, and offices sprung up as a result of the new-found economic life. It was the quintessential example of a boomtown as the amount of construction strained the once-sleepy beach town’s existing infrastructure.

The ban on online gaming back in August 2019 certainly resulted in the exodus of a lot of Chinese workers - which in turn negatively affected property and rental prices in Sihanoukville. But it’s important to note that not all Chinese expatriates who live in Sihanoukville went to work in online casinos and that the gambling ban only applies to online casinos and not to landed casinos. Some came to work in Chinese-owned properties such as casinos, resorts, and condominiums, many of which are seeing completion in 2021.

What’s the right price for a condominium in Sihanoukville?

For context, Sihanoukville saw a steep increase in real estate prices due to the influx of Chinese investors and workers. After the ban, prices began to fall and (as of Q1 2020) is seeing a slump due to the mass departure of Chinese nationals. If you’re looking to buy property near the beach, Sihanoukville might be worth considering now. Good thing beaches don’t fly away when the market slows down.

The starting sale price of condo units in Sihanoukville is ~$72,000 across the range of units available. To be more specific, 1-bedroom condominium units cost an average of ~$75,000 while the average cost of their 2-bedroom counterparts is ~$165,000. More spacious 3-bedroom options are available at ~$300,000. 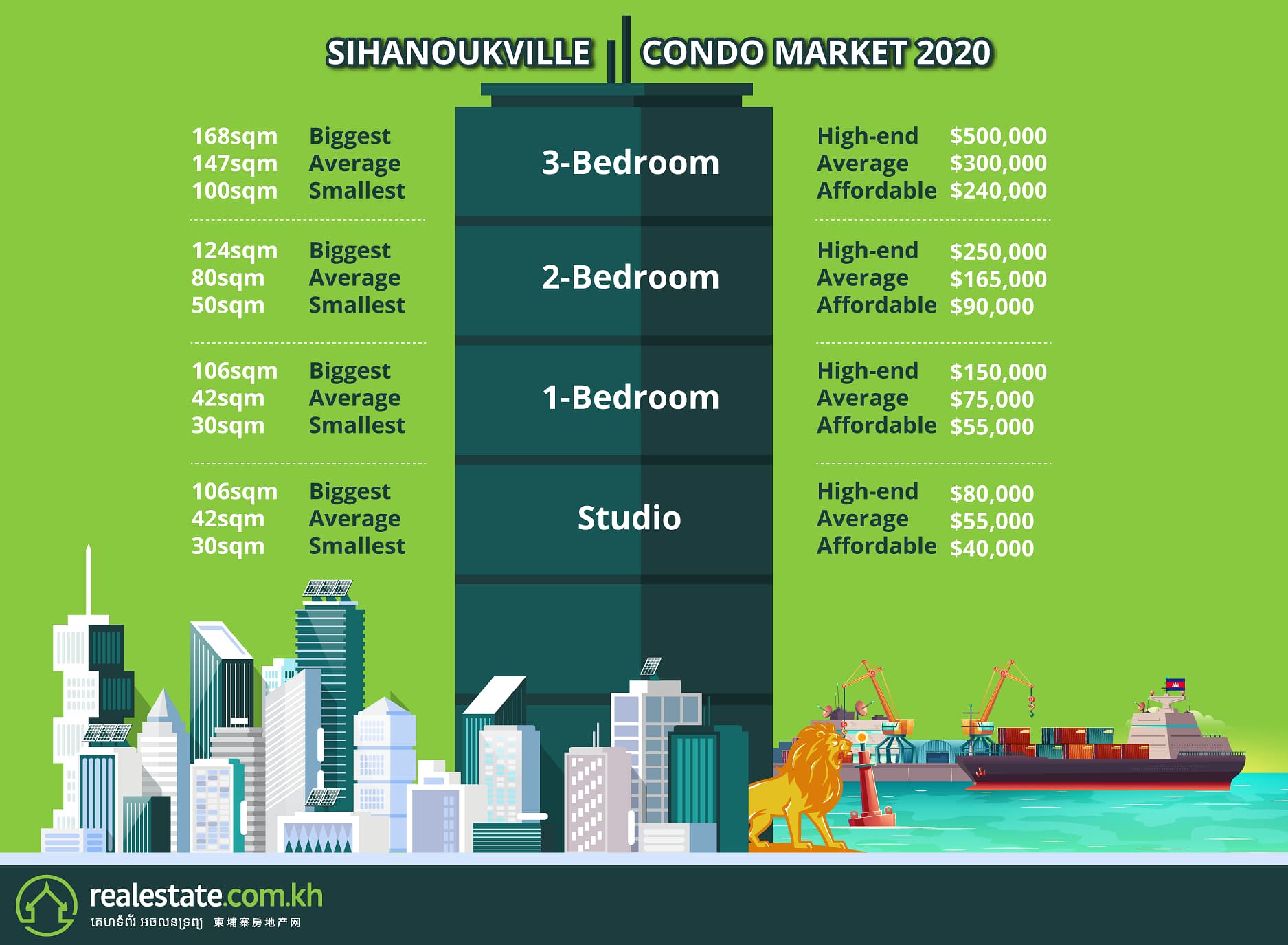 What’s an affordable price for a condominium in Sihanoukville?

Sihanoukville’s residential development was made to attract Chinese buyers who often have high-class tastes. This makes affordable and good-value condominiums plentiful in Sihanoukville today.

A 1-bedroom unit in Sihanoukville can be bought for ~$55,000. Bigger units are also available such as 2-bedroom units which can cost as low as ~$90,000. Even bigger 3-bedroom units can be purchased from $240,000. Though keep in mind that some affordable options may be quite a distance from the much-coveted beaches of Sihanoukville.

How much can I spend if I want a top-class condominium in Sihanoukville?

If you’re interested in high-end condominiums in Sihanoukville, you can start with Prince Golden Bay, Prince Tian Xi Wan, and Morgan the Pure Bay. (The Prince Golden Bay is one of the most anticipated beach-side projects in Sihanoukville. Realestate.com.kh)

How many more condominium units are coming to Sihanoukville?

Sihanoukville will welcome several thousand units in the next few years. In 2020, we could see an additional 5,000 units entering the city’s condominium stock. In 2021, Sihanoukville will usher in over 27,000 new residential units. This is a figure almost twice the size of projected additional units to become available in the capital Phnom Penh. And in 2022, another 4,000 units will be added to Sihanoukville’s condominium stock.

Tracked projects in Sihanoukville offer Guaranteed Rental Returns (GRR) ranging from 7% up to 24% for a period of time ranging from 2 to 8 years. Though we would advise thinking twice about buying property solely based on the double-digit GRR offered by the developer, especially in Sihanoukville as these calculations were likely made before the August 2019 ban on online gaming.

Will condominium prices in Sihanoukville increase next year?

Developers of tracked projects have indicated price increases ranging from 5% to 8% per year. Some developers initially planned these increases with the influx of Chinese workers in mind. But with the departure of most Chinese expats, and lack of Chinese tourists due to the Covid-19 lockdown, these price increases may meet challenges - something you may use to your advantage as a buyer.

If you’re sold on the idea of owning property in Sihanoukville, buying off-plan may be the best option as they tend to cost less and you gain the opportunity to make adjustments to your unit. 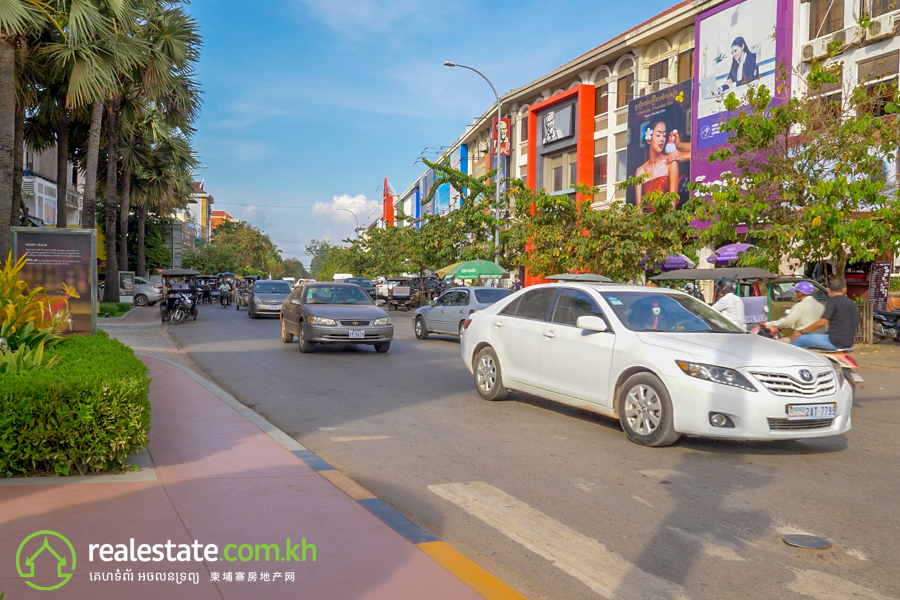 (Siem Reap's condominium market pales in comparison to Phnom Penh and Sihanoukville but there are a handful of opportunities. Realestate.com.kh)

With more than 1 million tourists per year, Siem Reap is unequivocally the Kingdom of Cambodia’s cultural tourism center. But not often talked about is how Siem Reap is the 2nd biggest population centre with over 1 million residents, according to the General Population Census 2019. This figure does not account for the many expatriate communities living and working in the province.

Siem Reap does not have the same kind of condominium development Phnom Penh and Sihanoukville have. This is primarily due to Siem Reap’s primary industries relying on tourist traffic; creating a marketplace where hotels and boutique guesthouses thrive while shophouses, villas, and boreys dominate the residential market.

What’s the right price for a condominium in Siem Reap?

There are still, however, a handful of on-going projects in Siem Reap. Unit prices in the city range from $68,000 to $157,000 according to the projects tracked. Some of these developments are noticeably more spacious than condominiums in Phnom Penh. 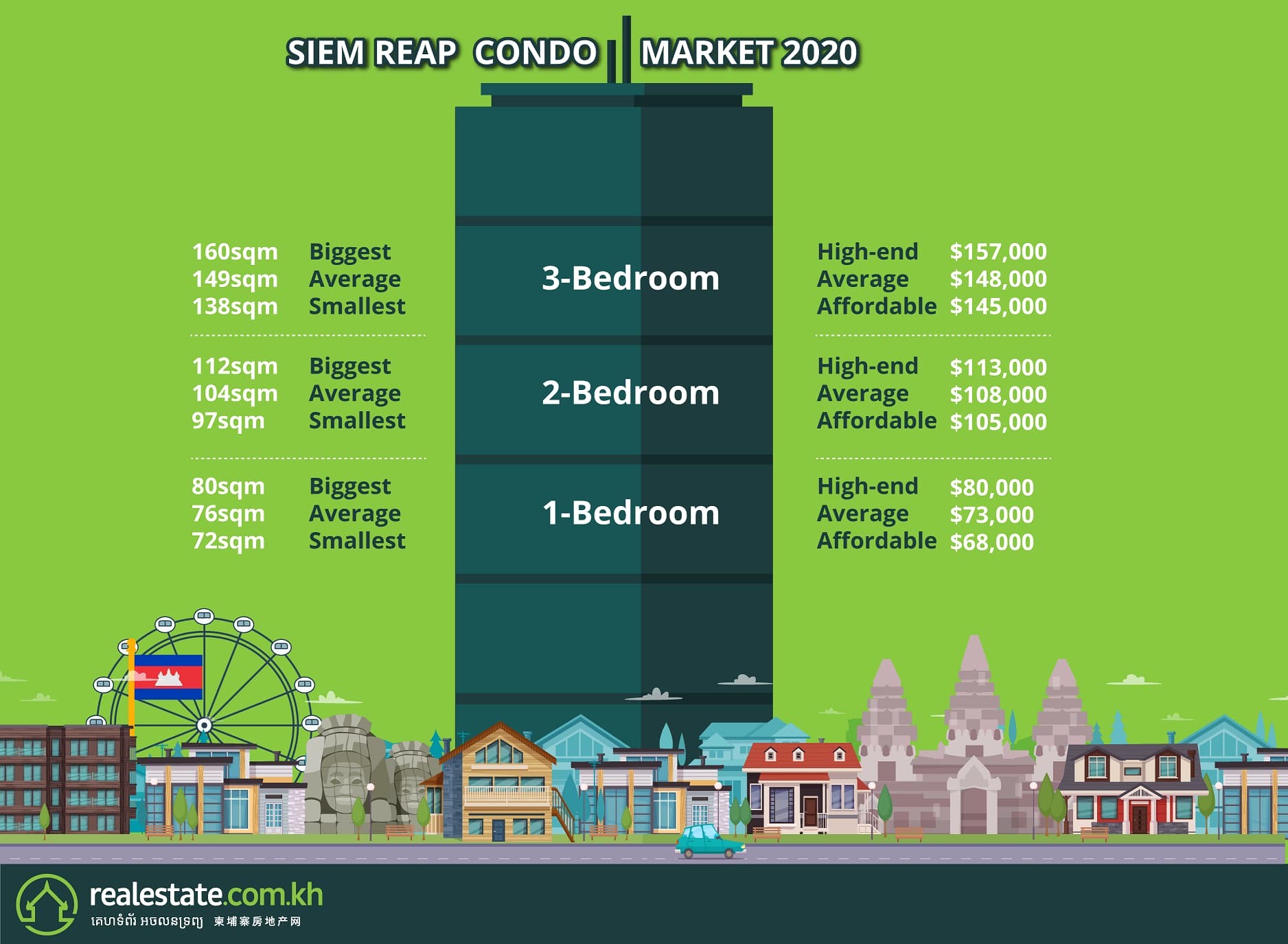 What’s an affordable price for a condominium in Siem Reap?

How much can I spend if I want a top-class condominium in Siem Reap?

How many more condominium units are coming to Siem Reap?

According to projects tracked, Siem Reap’s future condominium stock will be limited in the immediate future with only less than 1,000 units to be introduced by 2021. (A one-bedroom condominium in Sky Park, one of the few condominium projects in Siem Reap. Realestate.com.kh)

Investment returns on condominiums largely depend on the market of potential tenants. Since Siem Reap’s economy largely revolves around tourists who usually do not stay long-term, there are not a lot of condominium developments as the abundant number of boutique hotels offer much more attractive rental rates.

In January 2020, the Chinese government has banned its citizens from leaving the country to curb the spread of Covid-19. This has caused tourist numbers to Cambodia to drop significantly as more than a third of its annual tourists come from China. Initial government reports indicate that January 2020 arrivals are down by 60% and February 2020 arrivals are down by 90% - compared to 2019 figures.

With the dominance of hotels, boutique guesthouses, and the fears of a viral outbreak, investment prospects in condominiums in Siem Reap may face difficulties in the first half of 2020.

Will condominium prices in Siem Reap increase next year?