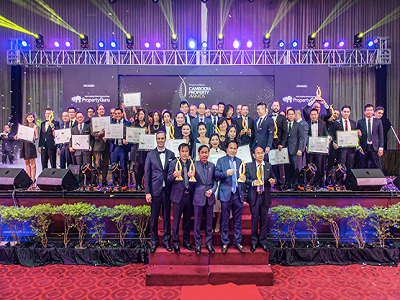 Cambodia’s most outstanding real estate developers were honoured at the second annual PropertyGuru Cambodia Property Awards during an evening of celebrations, dining and networking with more than 300 guests at the Sofitel Phnom Penh Phokeethra.

Earning gongs for Best Housing Development (Phnom Penh) and Best Landscape Architectural Design, the developer was hailed for its use of technology and placing a premium on its relationship with consumers by “being the Kingdom’s first developer that has created a dedicated mobile application for its client roster.”

Another big winner of the evening was five-time nominee Phnom Penh City Center, which collected a trophy for each one of its nominated projects: The EDGE, a Khmer-inspired retail development with customisable spaces for tenants; Residence90, a high-end residential development that was noted for its architectural excellence; and The Vanguard, the corporate headquarters of its parent company, with an expected completion date later this year. All three winning projects are located within the integrated Phnom Penh City Center development that aims to become a modern, sustainable, commercial and leisure district in the capital by 2025.

More than 30 projects located across Phnom Penh, Siem Reap and Sihanoukville joined this year’s competition. A total of 17 awards were presented, including a Special Recognition in Green Development for MTP Invest, developer of Siem Reap-based residential project Phum Barang, a double winner this year.

He added that more developers in the country should embrace sustainable and green building practices. “We all must look into Cambodia’s environmental guidelines, take into account greening initiatives, and push for new technologies that can help reduce the environmental destruction. Developers and consumers should think about air circulation and water treatment plants for converting dirty water from their properties before dispatching into the public sewer.”

The evening’s guest of honour, His Excellency Senior Minister Chea Sophara, Minister of Land Management, Urban Planning and Construction, applauded the successes of the Cambodian property sector in his keynote address.

Top country winners in Cambodia will now advance to the two-day PropertyGuru Asia Property Awards grand finale this November at the Sands Expo and Convention Center in Singapore to compete for more regional accolades and to be crowned "the best in Asia”.

Hari V. Krishnan, CEO of PropertyGuru Group, said: “We congratulate the developers who participated in the Cambodia Property Awards. Their outstanding projects inspire and shape the future of the Cambodian real estate sector, which has been given many opportunities over the last couple of years to grow. Because of the Awards, consumers are empowered to make confident property decisions, whether they’re first-time buyers, expat renters or serial investors. Property knowledge is essential in our culture at PropertyGuru. We wish the Winners the best as they advance to compete at our grand final in Singapore.”

Terry Blackburn, founder and managing director of PropertyGuru Asia Property Awards, commented: “Cambodia’s real estate sector is undoubtedly one of the most exciting emerging markets in Southeast Asia right now. Phnom Penh, Siem Reap and more recently Sihanoukville have all seen a huge increase in interest from foreign investors in the last few years. As ASEAN becomes increasingly integrated on trade, developers and investors are increasingly seeking opportunities in new countries and Cambodia is high on many people's list, many thanks to the efforts and quality developments of Cambodian developers who were recognised here at the Awards.”

BEST OF THE BEST AWARDS