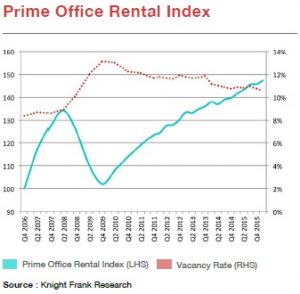 The Asia Pacific region is the place to be in right now if prime office property and rental growth is what you’re searching for. This is what one of the leading global property consultancy firms, Knight Frank, suggests in their Asia Pacific Prime Office Rental Index 2016 report. According to the firm’s thorough research, the Asia Pacific region has seen a combination of significant progress and constant stability in the first quarter of 2016. This is despite some prominent cities experiencing troubles and slowly slipping down the index.   In the Multi-sector Snapshot Q1 2016 report of Cushman & Wakefield, it is stated that in Beijing, “new supply in core markets elevated the overall vacancy rate, while rents remained stable.” While that may be true, Knight Frank’s data provides insight as to a projected decrease in rental returns and rent prices for the rest of the year for the city. Knight Frank’s report continues to explain that “in the first quarter of 2016, robust leasing demand from domestic firms in the finance and technology sectors drove net absorption to outstrip new supply in Beijing, arresting the downward trend in rents.” Also among the cities that saw a downward rental trend are Jakarta, Perth and Kuala Lumpur; where an expected increase in supply has forced property owners to reduce rent prices, further decreasing rental returns for their properties. This, however, did not slow down or do significant damage to the Asia Pacific Prime Office Rental Index. As the average vacancy decreased by 0.2 percentage points, the index grew by 1 percent in the first quarter and accelerated from 0.2 percent in the previous quarter. The highest contributor to this growth is probably Tokyo which showed the highest 3-month percentage increase of 3.4 percent, followed by Seoul at 2.6 percent where both cities show a projected increase for the next 12 months. As Head of Research for Knight Frank Asia Pacific, Nicholas Holt, puts it, “despite our longer term forecasts suggesting we are nearer to the top of the rental cycle in many markets, the next 12 months will see further rental growth in the majority of markets tracked as tight supply and steady demand prevails.” This growth is expected to be seen across 14 out of 19 cities which include Melbourne, Sydney, Shanghai, Hong Kong, Bengaluru, Mumbai, Taipei and Bangkok. "In Southeast Asia, Phnom Penh saw rents remain stable even as a surge in demand drove down the vacancy rate by 10.0 percentage points. With landlords vying to secure tenants as Hongkong Land’s Exchange Square nears completion, this trend is expected to continue." Considering that there are still many factors like government policy changes that may affect this continuous growth, Knight Frank is confident that prime office rental will remain to have stability at the very least. Holt explains, “While the macro-economic story across the region remains uncertain, office markets have tended to see rents hold up fairly well over recent months.” Recent years have showcased both extremes in terms of economic growth and the property market. It’s had its fair share of ups and downs, but as it continues to rise, it will really be an interesting and exciting time for the Asia Pacific region as it learns to nurture and cultivate its potential through proper investments.