Although the price of land in Phnom Penh has increased continuously until present, it has yet to have any detrimental effects on the flow of trade within the city. Quite the opposite; rising land prices have instilled confidence in the economy and encouraged foreign investors to come to Cambodia and invest their resources in the country, expanding trade and stimulating ongoing economic growth. While land prices are not on par with the region, this is not necessarily a bad thing, say experts.

Chrek Sokny, CEO of Century 21 VTrust, said that in 2015 land prices had hardly climbed since the year prior, however, land prices in 2015 seem slightly higher when compared with 2013. He notes that, however, land prices in Phnom Penh vary depending on the region, with some suburbs seeing land prices increase up to 20 percent, whereas aggregate increases only reflect a 10 to 15 percent rise city-wide.      Sokny added, "The rise in land prices currently does not affect the flow of investment because the price of land in our country is a lot less expensive in comparison to neighboring countries." He continued, "The increases in the price of land of 10 to 20 percent are in line with the country’s economic growth, so it does not cause difficulty for new investors at the moment. But if it continues to rise in the next four to five years, that will hurt people who intend to invest in Cambodia."      Sorn Seap, spokesperson for the Cambodian Valuers and Estate Agents Association, raised a similar view to Sok Ny. Seap suggests that land prices are currently rising in line with economic growth because land prices generally rise or fall depending on the state of a nation’s economy.  It is clear that land in Phnom Penh has the highest value; Siem Reap and Sihanoukville follow respectively. He added that the current land price does not affect the flow of direct foreign investment into the Kingdom since there are still a huge number of investors coming into Cambodia seeking various opportunities - mostly from Japan, Korea, China, Singapore, Malaysia, Taiwan, China, Hong Kong and other regional counterparts. "Phnom Penh land price increases on average five to 15 percent per year. If it continues to rise, it will disturb the investment flows in the coming years because the market size of Cambodia, compared with the regional economy, is still small. Therefore, if the price of land were to become equal with regional prices, investors would naturally go to other countries where market opportunities are more profitable," added Seap. He continued, "I think we will be unlikely to see the impact of this phenomenon in the next five years, as the Cambodian economy is still not that robust. Investors both inside and outside the country only come in with a specific purpose and conduct detailed research before they start investing.” Sorn Seap concludes, "It's a real market now though, not an inflated one - because an inflated market would jam when there was a problem, and a real one wouldn’t." For instance, when the land price fell generally during the global financial recession in 2008, land prices along Mao Tse Tung Boulevard did not go down. In fact, in contrast, prices in this area continued to rise slowly. This is because transactions were still occurring along this street, marking it as a real and robust marketplace. “The increased price of real estate and land today is a good sign that we, as a national economy, are on the right track, and we won’t have a problem in the near future,” Seap confirmed. According to a study by World Trust Estate on the price of land in 12 Khans of Phnom Penh in the first quarter of 2015, Phnom Penh land prices have gone up between 10 and 30 percent depending on the area. The areas are defined by whether they contain commercial activities, residential property or industrial undertakings. Particularly, the commercial area along the main road in Khan Chamkarmorn this year has increased between $3,500 to $8,000/m2, compared to only $3,500 to $5,500 the previous year. Land in trade zones located along smaller roads have increased from $2,500 to $3,000/m2 last year, up to $2800 to $4,000/m2 this year. The same study found that the price of commercial land along streets in Khan Tuol Kork has increased from $3,000 to $5,000/m2 in 2014, to between $3,500 to $8,000/m2 this year. Commercial land along smaller roads have also increased to current prices of around $2,500 to $3,000/m2, compared to $1,800 to $4,000/m2 last year. Residential land has risen from $2,800 to $3,500 the year prior, to about $3,000 to $ 5,000/m2 currently. Soeng Bonna, CEO of Bonna Realty Group, said in a phone interview recently that land prices in Phnom Penh are divided into three zones: Zone 1 is the city centre, where land prices seem a little higher. Land price in the suburbs, Zone 2, are still moderate in terms of the size and strength of the economy, as well as incoming investment trends, but the price in these areas is lower compared to other countries’ examples. He said the average price of land in the city centre costs $3,000 to $5,000/m2, which is good, but lower than prices recorded in other countries. He notes that these prices reflect that it is harder to gain revenue and profit from an investment in land here in Cambodia. “Land prices in the neighboring countries are higher than ours, but they have bigger population densities, larger economies, and more investment. If we continue to think our land price is low and keep demanding an equal price, both domestic and foreign investors will lose their ability to invest in Cambodia," said Bonna. He added that prices of land in industrial zones, Zone 3, are ranging from $20 to $50/m2 which reflects the current lack of infrastructure in these areas. Realestate.com.kh is proud to support the CVEA's Property View publication. Click here to get your copy, or if you are interested to join the CVEA today. 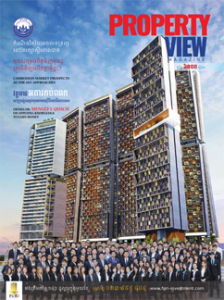