A new year brings renewed optimism, and while reports from the International Monetary Fund suggest as many as a third of all countries globally will enter recession in 2023, generally, Cambodia still has a positive outlook this year.

Key to this economic growth is investment and new infrastructure projects which get underway or will be completed in 2023 - strengthening transport and logistics, improving the landscape for future investment, and adding to the foundations of a country powering towards its ambitious goal of becoming an upper-middle income nation by 2030.

The construction of the Cambodia-South Korea Friendship Bridge is due to start in the second half of 2023 with the Ministry of Public Works and Transport set to meet with their South Korean counterparts at the start of 2023 to finalise details.

The South Korean government has pledged USD $1.5 billion in economic development loans to the Kingdom under the Economic Development Cooperation Fund (EDCF).

The bridge is planned to be built in two sections across the Mekong River and the Tonle Sap River in Kandal province. In the heart of Phnom Penh, the first section will be constructed from the night market near the riverside and across to the Chroy Changvar peninsula, with the second section of the bridge stretching across the Mekong River to Arey Ksat. 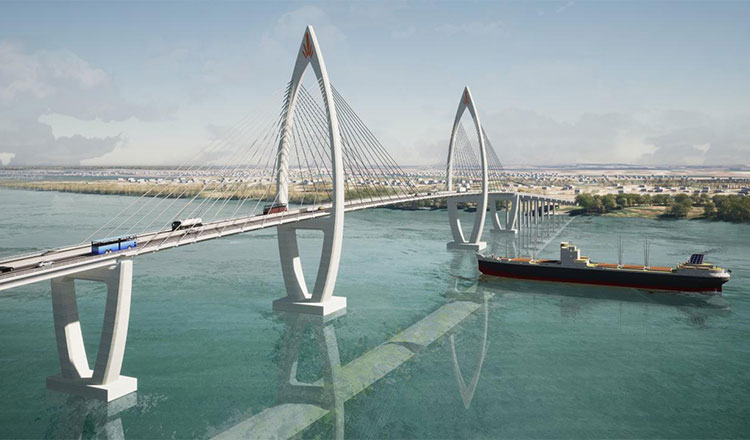 The project is expected to cost around USD $245 million and take around four years to complete, and the cable-stayed bridge will have four lanes of traffic.

These projects are necessary growing pains which will undoubtedly impact areas during the construction phase but these transport links are needed as the city expands beyond its current limits.

The USD $2.5 billion Koh Norea project is a massive and ambitious project covering 125 hectares in the capital and led by the OCIC. The project won't be completed in 2023 as it had only reached 30% completion by mid-2022.

The satellite city is intended to be home to commercial & entertainment areas, residential properties, schools, a medical centre, and many other urban conveniences.

The development is expected to offer capacity for around 50,000 people and will generate 7,000 jobs initially, rising to 10,000 at completion.

The development will also see the addition of two more bridges in the capital -  one connecting Koh Pich to Koh Norea which started construction in 2020 and is expected to cost USD $38 million. This larger bridge is 824 metres long and 24.5 metres wide with two 60-metre-high cable-stayed pillars and will have four main lanes and two motorbike lanes.

The long-delayed Kampot Seaport was due to open several times over recent years but was pushed back during the pandemic. The project was announced to be completed in October 2022 but is now awaiting government approval and funding to deepen the Kampot International Tourism Port’s waterway and make further improvements.

The port was constructed with an Asian Development Bank-approved USD $18 million loan and features a 123 metre long & 11-metre-wide wharf leading to facilities including passenger and restaurant buildings - it is hoped that the Kampot Seaport will be able ​to accommodate one million travellers annually. With tourism rebounding in 2023, the time is perfect for the Kampot Seaport to be functional if it means fulfilling the ambition of the Ministry of Tourism to become the country’s main gateway to tourism destinations in the region.

In 2022, the construction of a large international deep-sea port in Kampot also got underway at an estimated cost of USD $1.5 billion. “The port has a water depth of up to 15 metres, which can accommodate large cargo ships with a capacity of up to 100,000 tonnes,” said the Ministry of Land Management, Urban Planning and Construction.

The newly inaugurated NR41 will also connect major international ports such as the Kampot port, the logistics centre under construction at the Kampot tourism port, the Sihanoukville Autonomous Port and the newly built Kep-Koh Tonsay tourism port.

The Techo Takhmao International Airport, located around 35 kilometres south of Phnom Penh, is a joint venture between the Overseas Cambodia Investment Corporation, the Cambodian government, and the SSCA - called the Cambodia Airport Investment (CAIC).

By mid-2022, construction of the new international airport was one-third complete, but the important announcement of the partnership with Changi Airport Group has provided a boost of confidence to the ambitions for the airport to be the ninth largest in the world - importantly it will be designated as a 4F class airport allowing for larger aircraft to make use of the transport hub. Following on from the success of the Phnom Penh-Sihanoukville Expressway, which saw more than one million vehicles make use it in the first three months of opening, other major expressways and road improvements are in the works in 2023.

Phnom Penh and Cambodia have been linked to many railway projects over the years and there has been a renewal of interest in developing a transit network in the capital, while a national rail service linking the country to its neighbours such as Vietnam, Thailand and Laos would boost trade and logistics. However, of all of the infrastructure projects in this list, the development of a high-speed rail network or one in the capital within 2023 is least likely.

There are post-election 2023 promises being made for the possible Poipet-Phnom Penh-Sihanoukville railway, the Poipet-Siem Reap-Kampong Thom-Kampong Chhnang-Phnom Penh and Phnom Penh-Bavet lines, with the latter planned to link with Ho Chi Minh City via Moc Bai.

There is no shortage of investment into the infrastructure of the country, and Cambodia needs these partnerships (and increasing loans which need to be carefully monitored) for its gradual ascendance to be a regional economic player - 2023 is a milestone year for many of these projects and their progress and delivery will be exciting to monitor.