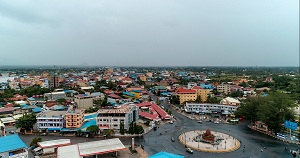 The growth in Cambodia’s real estate sector has been turning heads as of late. Housing trends in the country are changing massively. Living standards and land values are going up.

Another market, that of tourism in the Kingdom, is also witnessing a changing tide. As the number of incoming tourists rises, the amount invested into hospitality follows. Developers are now seeking to capitalise on Cambodia’s unique landscape by investing in retirement homes, vacation homes and eco-resorts.

Each of the country’s 25 provinces offers something unique that developers are eager to highlight. Siem Reap seems to currently be leading the progress for eco-resorts, as the Angkor Wat complex is already one of top tourist draws. Eco-resort projects have also arisen in Preah Sihanouk, Kampot, Kep, Koh Kong, Ratanakkiri, Mondulkiri and Kampong Speu provinces, however.

Teng Rithy, founder & chairman of R' Investment Group, said that Cambodia’s environment is fertile ground for eco-resorts to flourish. He claimed that investors should strive to create ecologically sustainable areas, in addition to resort buildings. Unlike nearby Singapore, where developers have to put millions into developing the land, the Kingdom’s environment already provides the foundation for nature-based getaways.

Rithy himself has plans in the works for eco-resorts in Phnom Penh, Siem Reap and Kampot.

“We are now doing feasibility studies to determine each province's potential location for these coming eco-friendly projects,” Rithy said.

The possibilities for highlighting natural features are nearly endless, given the country’s vast beaches, forests, waterfalls, mountains and rivers.

Diving deeper into the potential for Kampot province, Sok Ken, founder of real estate agency Kampot Property, said that province has seen rapid growth of eco-resorts over the last year.

Ken attested that the area along the Kampot River has gotten the most attention. Plots up to 30 kilometres away have also been eyed for their natural beauty, however.

Citing the access to mountains, rivers, forests and the ocean, Ken claimed there was still plenty of undeveloped potential in the region.

“There are many untapped and hidden areas that no one has touched yet,” he stressed.

“I believe there is still more opportunities because the majority of eco-resorts in Kampot are medium or small projects,” Ken added, claiming that the number of both domestic and Western tourists to the province is rapidly increasing.

Touching on price ranges, Ken said that local tourists were often looking to spend between $15 and $30 a night at an eco-resort.

Rithy noted that luxury accommodations in the country could go for as high as $3,000 a night. He urged developers toward creativity, however, saying that those bringing a new concept to the sector should have flawless plans. Everything from designs and construction to food, beverage and security needs to be thought out, he claimed.

Nos Mathsary, a representative of Bamboo Bungalow in Kampot, said that the resort made use of hybrid designs with traditional bamboo and thatch surrounding modern amenities. Meanwhile, they tried to highlight the natural environment of the river.

“We not only offer the best services but we also ensure safety and security,” Mathsary said.

Looking to the future, Mathsary predicted that the province would see a stronger economy from the rising tide of tourists. What was once known as a sleepy province, he said, could become a hub for hospitality jobs.

“Kampot will be well known both locally and internationally,” Mathsary said.